Showing posts from October, 2009
Show all

IN - HOUSE PLAYERS TO GIVE BENEFIT PERFORMANCE 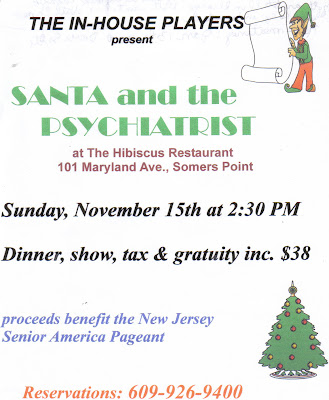 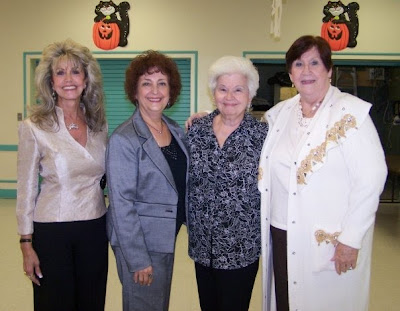 From left to right: Jo Ann Gordon, MSNJSA 2008, Vice President; Dale Maglia, President; Agnes Traschetti, Secretary; and Joan Kaplan, Treasurer. The ladies of the New Jersey Cameo Club held their final meeting of the year, on Wednesday, October 14th, at the Dover Senior Center in Toms River. A tasty luncheon was served, that was catered by Cafe Italia, Route 37 Toms River, consisting of chicken in a mushroom sauce, pasta, green salad, and a delicious homemade potato salad, provided by Dolores Peronace. Several scrumptious desserts were compliments of Jo Ann Gordon. The meeting followed, in which many topics were discussed quickly, in order to allow plenty of time on the agenda for the Club's main purpose: the election of the new slate of officers who will serve the New Jersey Cameo Club for the next two years. Fourty members attended the meeting to cast their ballots. The voting procedure was done by secret paper ballot. The ballots were collected and tallied by Marge Wanamaker an
Post a Comment
Read more

"A FUNNY THING HAPPENED" AT THE COLUMBUS DAY PARADE THIS YEAR

October 21, 2009
This year, MSNJSA State Pageant Director, Johanne Santori, requested a vintage car for Queen Bernadette. Here they are pictured in the shiny green convertible, vintage ala late 1920's, with MS STAFFORD 2009, standing alongside. Delores Puzio NJ CAMEO CLUB President and MSDESA 2008, also found a vintage car, courtesy Seaside Parade Marshal. She is seated in white fur, with Josephine Araniti, MSNJSA 2007, and Jo Ann Gordon, MSNJSA 2008. They are pictured smiling and wavng, but the article below, reveals a different story. The weather on Sunday, October 11th, was perfect, sunny and unusually warm, and there was hardly any breeze. The New Jersey Queens began to feel warm, so they shed the weight of their fur coats, soon after these photos were taken. NJSA State Director, Johanne Santori had a friend who lives in Atlantic City and owns that green vintage automobile. While she and her husband Adeo drove up the Garden State Parkway in their stylish car, (and who knows how fast he drove),
Post a Comment
Read more

WHAT'S IN A PICTURE?

October 18, 2009
NEW JERSEY CAMEO CLUB SHOWCASE, The Regency in Toms River, July 23, 2009 Recently, one of my Cameo Club sisters gave me this picture, since I am in it, as a keepsake. (I am the lady on the far right, chest out, proudly wearing my MS NEW JERSEY SENIOR AMERICA 2007 banner). As I gazed further at it, a proverb came to mind, "a picture is worth a thousand words". So, I would like to share my thoughts on what I see in this photo and what it means to me. It was a very hot summer day, the kind of day that one should stay home and avoid the hot sun and oppressive humidity. Yet, our sisters turned out in large numbers to entertain for the residents at the Regency. The center is dedicated to working with people who are in all stages of Alzheimers Disease. The NJ Cameo Club joins with the Regency, by bringing our own kind of love and cheer to these very special and needy people. The next thing I noticed, was the wide age range and the variety of our active performers. Of course, I woul
Post a Comment
Read more 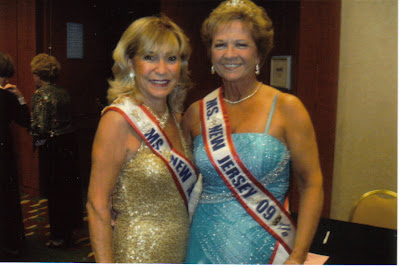 Bernadette Dudek, MSNJSA 2009, dressed in a beautiful blue beaded gown, proved to be an impressive contestant in this year's MSSA Pageant, as she came in 3rd runner up. Here she is with MSNJSA State Pageant Director, Johanne Santori, who is equally dressed for the occasion, as she smiles with pride at Bernadette in appreciation for a job well done. To the left of Queen Bernadette is Jo Ann Gordon, MSNJ 2008, and on the right, is MSNJSA State Pageant Director, Johanne Santori. Bernadette with MSNJSA State Pageant Director, Johanne Santori, and to the left are Sandra Greco, MSSA 2003, and MSVASA 2009, Maureen Fitzpatrick Ribble. The MS SENIOR AMERICA PAGEANT 2009 QUEEN'S COURT. Bernadette Dudek, MS NEW JERSEY, 3rd runner up, stands elegant and statuesque, next to reigning Queen Gayle King, from New York. Next to her is Maureen Fitzpatrick Ribble, MS VIRGINIA SA, 4th runner up. Next to Gayle is Barbara Travis, MS MISSISSIPPI SA, 1st runner up, and on the far left is Dianne Wil
Post a Comment
Read more
More posts