Showing posts from August, 2019
Show all

THE SIZZLING SUMMER OF 2019 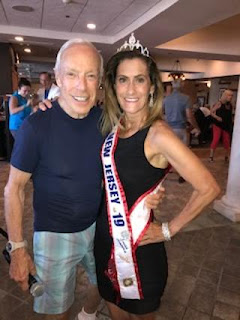 The June events of the NEW JERSEY CAMEO CLUB were reported in earlier posts.  With the exception of the 3rd quarterly meeting in July, the ladies took a well earned hiatus that month.  All, that is, except except for Dr. Debra Canale, MS NEW JERSEY SENIOR AMERICA 2019, and Denise Ely, first Runner Up.  Besides parades, QUEEN Debra was a featued guest at the Renault Winery.  Donned in her crown and banner she danced the night away to the tunes spun by DJ Jerry Blavit.  During a break, he invited Debra to speak to the crowd about the MS NEW JERSEY SENIOR AMERICA PAGEANT. An article, about Denise Ely, which included photos, appeared in the New Jersey Journal on July 31st, written by Deidre Flanagan Ward. In the article titled, "First Runner Up Is A Win/Win For Liver Transplant Recipient", she wrote that Denise set a precedent for being the first transplant to participate in the MS NEW JERSEY SENIOR AMERICA PAGEANT.  A longtime volunteer for the NJ Sharing Network, Den
Post a Comment
Read more
More posts