Showing posts from December, 2009
Show all

"TIS THE SEASON TO BE JOLLY"!

December 20, 2009
There are three words to describe the NEW JERSEY CAMEO CLUB Christmas Party: FOOD, FUN, and FELLOWSHIP. The event was once again held at the Lobster Shanty Restaurant in Toms River, on Friday, December 11th. The FOOD was delicious and was served by a courteous and attentive waite staff. There was a cash bar, and a mimosa fountain which flowed amply all evening long. The FUN was provided all night long by the great musical team of Steve and Debbie Berger. During dinner, they played background music, that did not interfere with people's conversations. Afterwards, they performed all the songs on everyone's wish list, from sentimental ballads, to lively line dance tunes. During Steve's rendition of "It's a Wonderful World", couples stopped dancing, and others in the room quieted down to listen to the lyrics. His tender voice brought sighs and a tear or two out of the guests. Debbie did wonderful solos of her own. Her alto voice is clear and mellow to the ear. Toge
Post a Comment
Read more 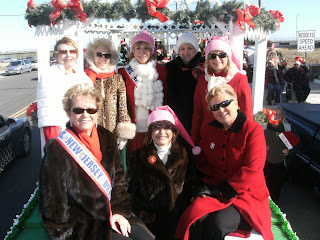 Despite the chilly temperatures, crowds of people gathered for the Atlantic City Christmas Parade on Saturday, November 28th. The parade route started at the beginning of Atlantic Avenue at the monument, ending at the outlet shops. On hand for the annual event "braving the elements" were eight elegant ladies from the NEW JERSEY CAMEO CLUB. They road atop a gleaming and colorful holiday float, that came especially equipped with seats, thus making the ride more comfortable. The entourage included: Bernadette Dudek, MS NEW JERSEY SENIOR AMERICA 2009, and members of The Queen's Court; Rebecca Orsatti, Kay Vique, and Carol Lelli. Other ladies in attendance were: Johanne Santori, MS NEW JERSEY SENIOR AMERICA PAGEANT STATE DIRECTOR, Barby Jo Crema, Marge Wanamaker, and Agnes Raimondi. They dazzled the crowd, each one stunningly dressed, and sporting the latest in "haute fur couture." Waving and smiling, they threw candy to the children along the parade route. Everyone
Post a Comment
Read more
More posts