Showing posts from September, 2015
Show all

REFLECTIONS ON THE SUMMER OF 2015 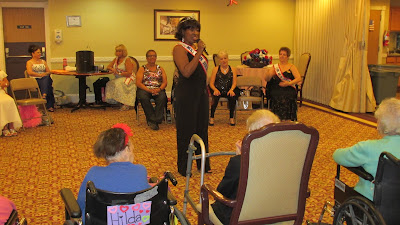 As today's thunderstorms threaten to change the seasons, it seems only fitting to help summer linger on a little longer, by reflecting upon the activities of the NEW JERSEY CAMEO CLUB, and their current QUEEN, Sherri McGhie, MS NEW JERSEY SENIOR AMERICA 2015. July and August were busy months for both QUEEN Sherri and the CLUB, with showcases in Jackson and, concluded with another appearance at Kennedy Plaza and the Armed Forces Parade, both held in Atlantic City.  QUEEN Sherri opened the NJCC SHOWCASE at Care One in Jackson on July 23rd, with a lively song. She joins the ladies for the finale, as they sing a medley of songs from Motown, saluting Diana Ross and the the Supremes. In between events, QUEEN Sherri made a personal appearance at the Tropicana Casino and Resort.  On Monday, August 24th, she attended the casino's "TASTE OF THE QUARTER", and was a celebrity chef.   The annual event was held for the benefit of the United Way.  She was chaperone
Post a Comment
Read more
More posts