Showing posts from December, 2019
Show all

THE NEW JERSEY CAMEO CLUB ... A LEAGUE OF EXTRAORDINARY OF WOMEN! 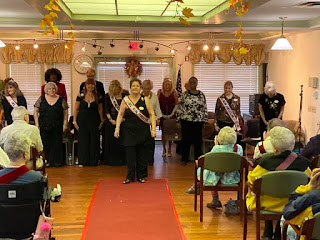 Neither age nor physical malady kept these fabulous ladies of elegance, all 60 plus, from keeping their appointed shows during the holiday season which started from Thanksgiving and ended this month.  The kickoff began at Brandall Estates, in Linwood on Thursday, November 14th.  The residents clapped enthusiastically in appreciation of the opening number.  They held their own Pageant that  day as well, and one of the residents was crowned Miss Brandall Estates. Those who received awards wore maroon sashes, and were seated in the audience.   VETERANS DAY CELEBRATION The NEW JERSEY CAMEO CLUB entertained the veterans at the Manahawkin Elks Lodge on Tuesday, November 19th.  Opening ceremonies included:  the Presentation of the Flag by the New Jersey State Troopers Honor Guard,   and was followed by the National Anthem, sung by Carolyn Slade-Harden, MS SENIOR AMERICA 2017.  NEW JERSEY CAMEO CLUB member Millie Tate, lead the singing with a soulful rendition of "Pr
Post a Comment
Read more
More posts