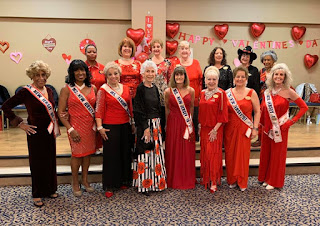 The winter hiatus was halted in February in order to accommodate requests from two senior living facilities for a NEW JERSEY CAMEO CLUB SHOWCASE.  So, these fabulous ladies, troupers all, were only too happy to oblige.

The weather on Valentine's Day was picture perfect for the First NJCC SHOWCASE at Spring Oaks Assisted Living in Toms River.  The auditorium was adorned in Valentine's Day decor, and the residents were in a festive mood. 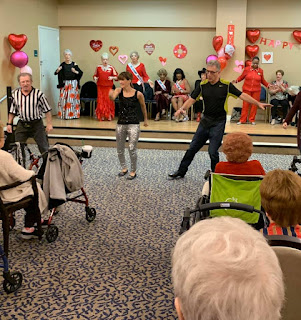 Dr. Debra Canale, MS NEW JERSEY SENIOR AMERICA 2019, opened the Showcase, and got the joint rockin' with her aerobic routine and dance.  Two male residents joined her along with some "Sisters", who can be seen in the background. 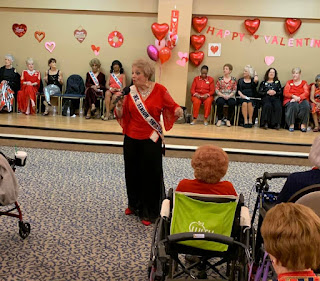 Carolyn Slade Harden, MS SENIOR AMERICA 2017,  performed one of her signature songs, "I Love Being Here With You".   Her style and grace made everyone feel welcomed, and set the tone for more great performances that followed. 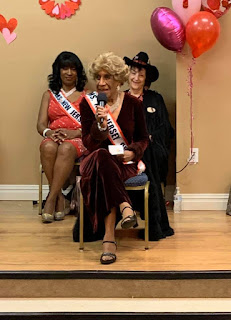 Norma Mc Ghie, MS NEW JERSEY SENIOR AMERICA 1995, has been entertaining audiences for many years since her coronation.  Her comedy routine made everyone happy. 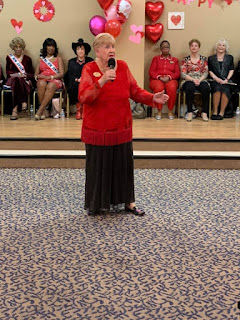 Joan Kaplan, another long time member of the NEW JERSEY CAMEO CLUB, went down memory lane, by telling stories of how much her mother loved music.  In her honor, she sang a popular WWII favorite.

The ladies and audience joined together for the finale to sing a patriotic medley. 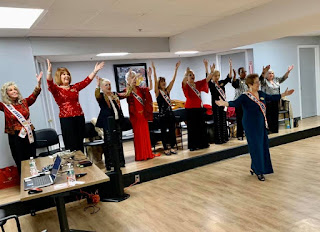 Another opening of another great show, as the ladies took their well deserved bow.

Although the spirit of Valentine's Day was still in the air, Denise Mechan, Showcase Coordinator, announced the theme for the day was to celebrate "All Matters of the Heart".  The purpose of the Showcase that day was to honor those club members and their their spouses who have suffered illnesses during the recent past and have survived.  The following is just a short list of brave ladies and/or their spouses. 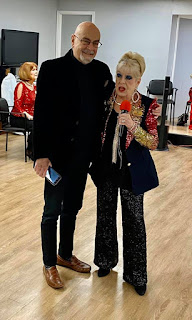 Terry Meade, MSNJSA EXECUTIVE STATE PAGEANT DIRECTOR, sang "I Can't Smile Without You", to her husband Mark of 55 years.  Since receiving a new heart 11 years ago, they have become spokesmen for organ transplant awareness. 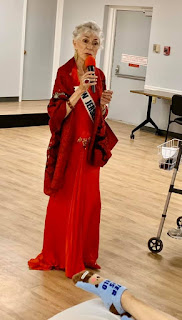 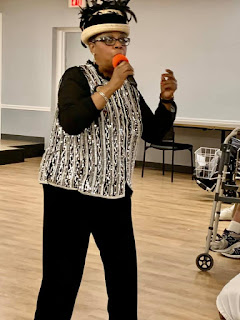 Nancy Bassett, another exceptional songstress, who underwent open heart surgery a few years ago, is living with chronic heart disease.  She was awarded a trophy from the NEW JERSEY CAMEO CLUB, for having attended the most Showcases in 2019. 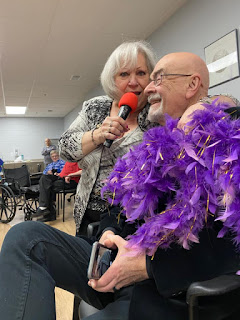 Millie Tate of Linwood, is also a cancer survivor. Her humor and vitality are contagious every time she sings.  Her saucy rendition of "Big Spender", was fun to watch.

Every NEW JERSEY CAMEO CLUB SHOWCASE, begins with the current QUEEN, Dr. Debra Canale, MSNJSA 2019.  An accomplished gymnist, she wears tights for her routine, and ties her hair up in a pony tail.  She also closes the Showcase, and, at that time, the audience gets a chance to see how lovely she is when dressed in evening wear. 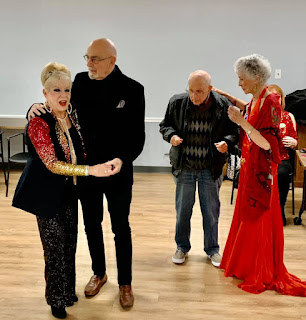 After honoring the survivors, she invited them to the floor for a final dance.  After they started, she invited everyone else in the room to join them.

With the last note of the finale sung, the ladies clenched hands and raised their arms high over their heads, proudly proclaiming victory over their illnesses and adversities.  Kudos to all, with best wishes and good health for the 2020 performance season.

Popular posts from this blog 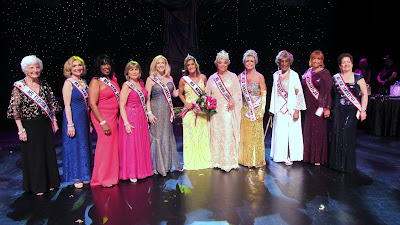 The waiting is over and plans for the MS NEW JERSEY SENIOR AMERICA PAGEANT 2021 are underway.  Due to the COVID-19 virus, other State Pageant Directors have been struggling with how to hold their PAGEANTS this year.  Some have been virtual, while others have appointed their Queen.  But not so in New Jersey.  Administrator Johanne Santori/MSNJSA'06, and Director of Pageants/Terry Meade, decided that the PAGEANT will be held live, and is scheduled for Thursday, June 3rd, 1:00 PM at the Clarion Hotel and Conference Center, in the Ballroom, 815 Route 37 West, in Toms River.  For the first time in its history, the 2020 MS NEW JERSEY SENIOR AMERICA PAGEANT had to be canceled, due to the COVID-19 virus.  Rather than lament over the "lost year",  the next few photos are reminiscent of happier times in 2019 and early 2020.  This photo was taken at the 2019 MSNJSA PAGEANT, when Debra Canale won that year's title.  She is joined by other STATE & NATIONAL QUEENS who were in a
Read more 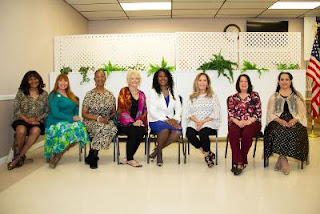 The highly anticipated MS NEW JERSEY SENIOR AMERICA PAGEANT 2021, is  only two weeks away.  This year, the PAGEANT will be held at the Clarion Hotel and Conference Center in Toms River, on Thursday, June 3rd in the Grand Ballroom at 1:00 PM.   Eight elegant ladies who will participate in the time-honored PAGEANT met each other yesterday at the Manahawkin Elks Lodge, for a "Meet and Greet" luncheon, hosted by the Board of MS NEW JERSEY SENIOR AMERICA, INC., and the NEW JERSEY CAMEO CLUB.    All photos, courtesy Sherri McGhie/MSNJSA'15 From left to right are: Dorothy Johnson/Mt. Laurel, Dale Browndorf/Margate, Amini Sababu/Trenton, Geri Rizzo/Atlantic City, Donna King/Egg Harbor Township, Pat Gensinger/Brick, Mary Neafie/Barnegat, and Donna Kofman/Union Beach.   The agenda for the afternoon meeting included: welcome speeches by members of the Board and Dr. Debra Canale/MSNJSA 2019, overview of the history, purpose and goals of  MS NEW JERSEY SENIOR AMERICA, INC., the PAGEA
Read more