January 2010 turned out to be a busy month of performing for the elegant ladies of the NEW JERSEY CAMEO CLUB. As a result, NJCC SHOWCASE DIRECTOR Delores Puzio declared the month of February as a time for everyone to get some well earned rest and relaxation. It turned out her timing couldn't have been better, since this month has made the history books as being the worst winter on record for most of the nation. Meteorologists across the country have reported record snowfalls in 49 of our 50 States. So, even though some of our lovely ladies may be in warmer climates at this time, they may still be experiencing record low temperatures as well.

As we all dig out from under, let us not forget that VALENTINE'S DAY is tomorrow. Here's wishing all of our readers a wonderful and special day spent with loved ones.

In closing, here is a thought for the day that I found from the internet:

HEALTH
is the greatest gift,

CONTENTMENT
is the greatest treasure,

CONFIDENCE
is the greatest friend.
Posted by Ms New Jersey Senior America at 7:29 AM No comments: 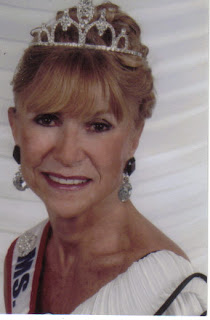 Last month was an exciting time for MS NEW JERSEY SENIOR AMERICA STATE PAGEANT DIRECTOR, JOHANNE SANTORI. The following interview in Q & A format is an account of her involvement with this year's MISS AMERICA PAGEANT.
Q: When and where was the pageant held?
A: At the fabulous Planet Hollywood in Las Vegas. The pageant and related activities lasted 12 days. The final pageant was held on Saturday, January 30th, and was televised
nationwide on TLC cable channel.
Q: What is your title, and could you describe your job?
A: I am a hostess. The 53 contestants are divided into groups. My partner and I took care
of 9 women. As hostess, I am responsible for the welfare and comfort of the women in my
group. I make sure that my girls understand their daily schedule, which include rehearsals,
and other activites and events during the 12 days of the pageant.
Q: How many years have you been involved with the MISS AMERICA organization?
A: 20 years. In 2006, when the organization moved to Las Vegas, they invited me to their new
home.
Q: Did you fly to Vegas alone?
A: No, this year I went with 12 other ladies who flew from Atlantic City.
Q: Did any of your girls make the finals?
A: Yes. Stephanie Witter, MISS TENNESSEE, 3rd runner up, and Kristy Cavinder, MISS
CALIFORNIA, 1st runner up.
Q: What was the big white tent backstage?
A: That was the dressing room, located close to the stage to make it easier for the contestants
to make quick costume changes. That's where we hostesses stayed to dress our girls.
Q: What was the atmosphere like in there?
A: Although it was very tense, we hostesses tried to keep the girls as calm as possible.
Q: The star studded judges' panel was very impressive. Did you talk to any?
A: I spoke briefly to Rush Limbaugh as he took a break during the interviews. He was
gracious and friendly to me.
Q: In your opinion, is the pageant different today than it was 20 years ago?
A: Yes. Today, the judges choose 15 finalists, then start eliminating by 2's. Instead of the top
5 that remains, there is the top 7, then they choose the winner, starting with the 4th
runner up, etc.
Also, the media, TLC cable channel and Comcast network demanded a lot of the contestants'
time to appear in different activities. I had to escort my ladies to many locations throughout the
hotel for filming sessions, and to a ribbon cutting ceremony to commemorate the opening of
Planet Hollywood's new condominium building on Friday, January 29th.
Q: Do you have any other comments regarding the pageant?
A: I feel very privileged to volunteer for the MISS AMERICA PAGEANT. These young
women represent all that is good and positive about our country and the present generation. It is because of them that I have hope for the future.