A YEAR IN THE LIFE OF A SENIOR QUEEN


Since winning the title of MS NEW JERSEY SENIOR AMERICA 2017, Carolyn Slade Harden has had a busy year of appearances throughout the State of New Jersey.  She has received numerous letters from State and Federal Lawmakers acknowledging her achievement.  Next week, she will crown the new QUEEN who will reign for 2018. 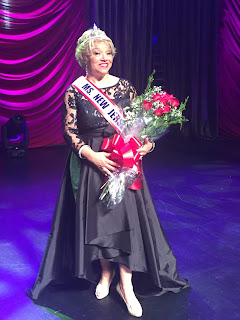 It has been many years since a New Jersey QUEEN won the National Title, the most recent being Sandra Greco, in 2003, with Laverne Stokes and Jan Dickinson, dating back to the early 1980s.  During the millenium, State QUEENS have made the top 10, and even all the way up to first runner up. 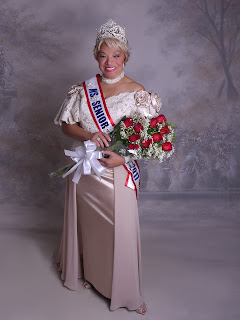 Finally, Carolyn Slade Harden, from Manchester, went on to win the title of MS SENIOR AMERICA 2017.  National QUEENS also have an impressive travel itineray and TV appearances during the year of their reign.  Carolyn has begun travelling to other State Pageants to appear as guest performer and to crown their State QUEENS.
When Carolyn takes the stage at Harrahs next week to give her farewell presentation, it will not be so bittersweet as it has been with the former New Jersey QUEENS.  Although her year as State QUEEN has come to an end, Carolyn still has the rest of  her reign as MS SENIOR AMERICA 2017 to fullfill.
GOOD LUCK, DEAR QUEEN, WITH THE REST OF YOUR TRAVELS - YOU'VE MADE NEW JERSEY PROUD!
Posted by Ms New Jersey Senior America at 10:35 AM No comments:


"Women Our Age, 60 and Over, Are Not Declining, We're Celebrating!"  is the theme for the MS NEW JERSEY SENIOR AMERICA PAGEANT 2018.  Harrahs Resort Hotel and Casino will host the annual Pageant on Wednesday, June 6th at 1:00 PM in the Concert Venue Theater.

Nine ladies who have reached the "Age of Elegance", and who come from various parts of the Garden State are participating, and all are hopeful of winning this year's crown. 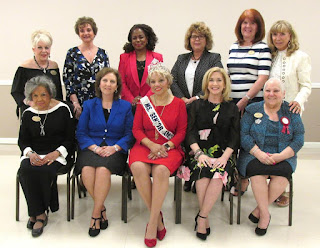 THE CLASS OF 2018
Pictured above, seated from left to right are: Norma Cruz-Vasquez/Barnegat, Renee Tompkins/Wall, Carolyn Slade Harden/MS SENIOR AMERICA 2017, Suzie Neustadter/Margate, and Millie Tate/Linwood.  In the second row: Terry Meade/Executive State Pageant Director, Jeri Georger/Toms River, Sheila Jackson/Atco, Roxanne Terramagra/Egg Harbor City, Denise Mechan/Bayville, and Johanne Santori/Administrator.  Debra Canale/Medford was absent. The contestants possess a variety of talents which include: singing, dancing, photography and gymnastics.  A distinguished panel of judges will grade them in 4 categories:  Evening Gown, Philosophy of Life, Talent and Private Interview.
There will be featured performances by THE GRANDE DAMES CHORUS and the JERSEY STAR DANCERS, other guest appearances, and a farewell presentation by outgoing QUEEN, Carolyn Slade Harden.  The Pageant is rated general and can be enjoyed by the entire family.
Tickets are $15.00 for all seats and can be purchased on the day of the Pageant at the box office, located outside the Concert Venue Theater,  starting at 11:00 AM.
Which one of these elegant women has a CROWN in her future?  And, which one will go on to compete for the national title of MS SENIOR AMERICA 2018, in October at Resorts?  To find out, come on down, Thursday, June 6th, and cheer your favorite on to victory!
Posted by Ms New Jersey Senior America at 8:26 AM No comments: 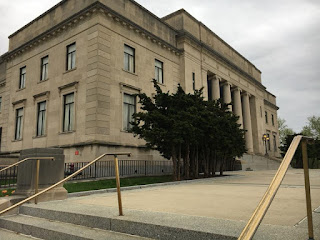 All photos, courtesy Terry Meade
The Trenton War Memorial is one of the many Government buildings that make up the Trenton Municipal Capitol Complex.  The marble building with its majestic columns in the front, is home to the symphony, ballet and other groups.

The MERCER COUNTY SENIOR AMERICA PAGEANT Organization held a "Community Mother's Award Brunch," on Sunday afternoon May 6th, at the Trenton War Memorial.  Eleven women were honored for their commitment to preserving family values, and for their dedication to make life better for their community, city and State.  The woman came from all walks of life and included: local and State politicians, community activists, a radio personality, senior beauty pageant queens, a minister, and an educator.  The celebration was the "brainchild" of Lawaner Wilkins Sykes, who served as emcee. 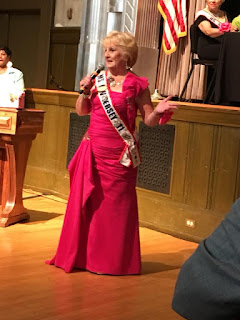 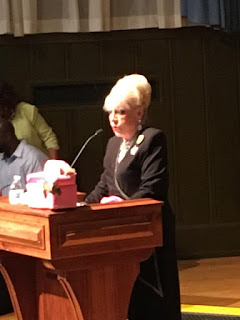 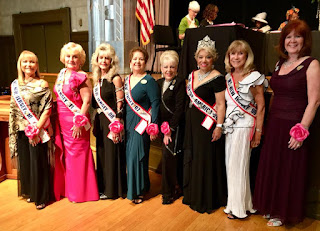 From left to right are: Becky Orsatti/MSNJSA2010, Leah Whelan/MSNJSA2011, Jo Ann Gordon/MSNJSA2008, Josephine Araniti/MSNJSA2007, Terry Meade/MSNJSA STATE PAGEANT DIRECTOR, Carolyn Slade Harden/MSSA2017, Johanne Santori/MSNJSA2006 & MNJSA ADMINISTRATOR, and Denise Mechan/NEW JERSEY CAMEO CLUB SHOWCASE COORDINATOR.
Johanne and QUEEN Carolyn came down from the stage and joined their "sisters" to sing "With Love, From Motown".  Josephine Araniti  invited everyone in the room to stand up and participate.  She showed them all the "signature moves"  to make while singing the 3 song medley.  It turned out to be a great fun activity, and broke up the solemnity of the occasion for a just little while.

Then, Lawaner asked each lady a question on various aspects of motherhood, and they answered based upon their life experiences. 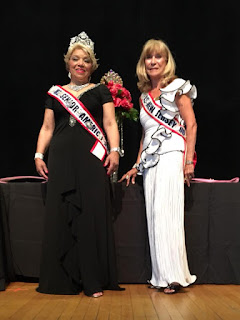 Carolyn Slade Harden, MSSA2017, and Johanne Santori, MSNJSA 2006, and MSNJSA PAGEANT ADMINISTRATOR, were among the honorees. Carolyn spoke encouraging words of wisdom, and Johanne spoke about the history of the Pageant, and how its founder, Dr. Mott set out to restore respect back to the elderly. 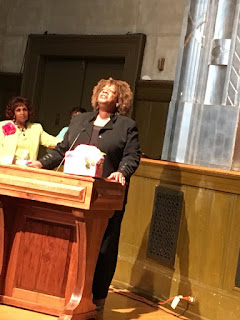 The program concluded with a prayer and an emotional hymn, sung by Reverend Lois Keys-Alexandria.  Everyone enjoyed a delicious chicken dinner, and in the background, there was music for easy listening provided by a local DJ. 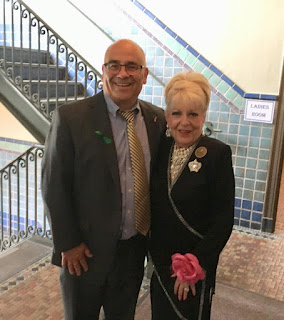 There were 250 guests who attended the brunch.  Among them were politicians and their wives who came  to support honorees Senator Shirley K. Turner, and Councilwoman Marge Caldwell-Wilson.  One in particular was, Assemblyman Reed Gusciora, who is running for Mayor of Trenton.  He and Terry posed together out in the lobby. 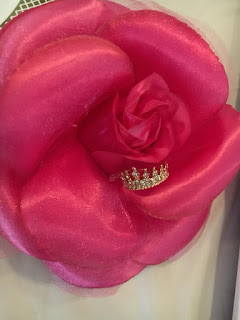 The honorees were given a beautiful plate with their photo in the middle and the sides were embossed in gold plate.  They and the performing guests were given this lovely rose, complete with a crown ring in the middle.  All afternoon long, a photographer went table to table, taking pictures.  He made copies and gave them to all the guests to take home. 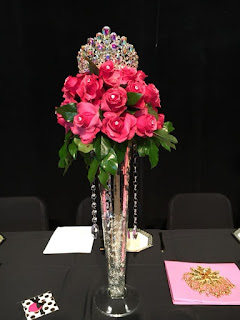 Everyone received a free raffle ticket for chances to win prizes of: dinners for two at Trenton area restaurants, a painting, and this elegant vase with a gorgeous crown on top.

Lawaner thanked the Committee for all their hard work to make the afternoon a success, and she invited everyone to get out of their seats and mingle with each other in the time remaining.  A great time was had by all, and once again, congratulations to Johanne and Carolyn!