"The Age of Elegance, Acknowledge it, Embrace it, Act on it", is the theme for the MS NEW JERSEY SENIOR AMERICA PAGEANT 2017.  Harrah's Resort Hotel & Casino will host the annual event on Wednesday, May 31st at 1:00PM, in the Concert Venue Theater.  The Pageant is the search for that gracious lady who best exemplifies the dignity, maturity and inner beauty of all senior Americans.

Nine women who have entered the "Age of Elegance", that is, 60 years or better, will participate in the time honored Pageant.  The winner then goes on to compete for the national title of MS SENIOR AMERICA 2017, which will be held at Resorts also in Atlantic City in October. 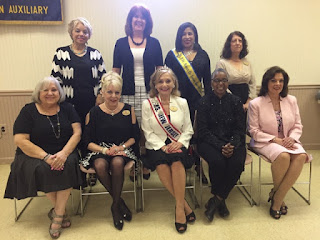 Meet the Class of 2017.  Seated from left to right are: Millie Tate/Linwood; Terry Meade/Princeton; Diane Deluca/MS NEW JERSEY SENIOR AMERICA 2016/Linwood; Wenonah Brooks/Hopewell; and Carol Rosario/Southampton.  Standing from left to right are: Carolyn Slade Harden/Manchester; Denise Mechan/Bayville; Gail Wright/Trenton; Mary Neafie/Barnegat.  Not in photo is Wirta Armstrong/Oakhurst.   The NEW JERSEY CAMEO CLUB hosted a Meet the Contestants luncheon in April, at which time the ladies got to know one another and to prepare for the upcoming Pageant. 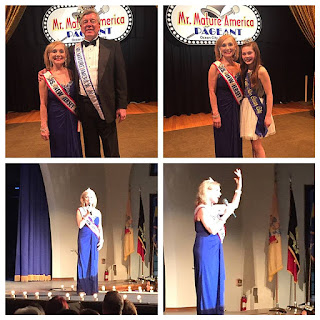 Photo courtesty of Johanne Santori
QUEEN Diane Deluca spoke at the luncheon about her experiences during this year of her reign.  The photo collage was from the Mr. Mature America Pageant, that was held in Ocean City earlier this year.  She had an exciting and rewarding year, and gave much needed advised to the contestants.

Everything is set and ready for next week's MS NEW JERSEY SENIOR AMERICA PAGEANT 2017, and the anticipation of crowning the new QUEEN is at a feverish pitch.  Who will she be?  Friends and family will be there to cheer for their own to win.  Tickets are $15.00 for all seats, and can be purchased at the box office which opens at 11:00 AM on the day of the Pageant.

Posted by Ms New Jersey Senior America at 7:40 AM No comments: