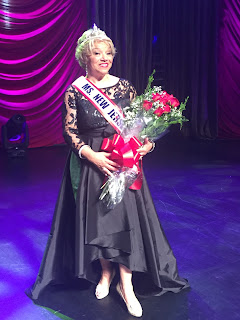 The ladies of the NEW JERSEY CAMEO CLUB held their 3rd quarterly meeting on July 12th at the American Legion Post in Lakewood.  The agenda was filled with topics that evoked lively discussions, and opinions from the membership.  President Carole Lelli kept the discussions focused, and Director Johanne Santori clarified situations for the membership.

The main focus, however, of the July meeting was to welcome and honor their newly crowned QUEEN, Carolyn M. Harden, MS NEW JERSEY SENIOR AMERICA 2017.  She received her first pin to be worn on her banner, the traditional crown, other gifts, and monetary awards from both the MSNJSA PAGEANT and the NEW JERSEY CAMEO CLUB.  Carolyn spoke humbly to the membership, and offered sincere friendship to all her "sisters".

The luncheon menu consisted of sandwich wraps, an assortment of summer salads, and desserts.  Special thanks to the committee for the delicious fare, and to Jo Ann Gordon, MSNJSA2008, for baking her yummy blonde brownies! 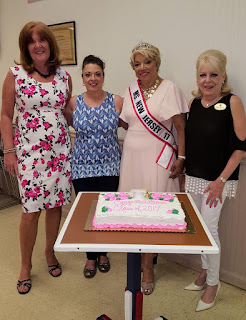 The CLUB honored QUEEN Carolyn and the Ladies of her Court, with a special cake.  In the photo from left to right are: Denise Mechan/4th RU; Carol Rosario/1st RU; QUEEN Carolyn; and Terry Meade/2nd RU. Wenonah Brooks/3rd RU was absent.

Governor Chris Christie has already sent QUEEN Carolyn a congratulatory letter.  On August 28th, she will meet personally with Mayor Palmer of Manchester and the Town Council, to receive an Award of Achievement.  On August 2nd, she will meet with the Ocean County Board of Chosen Freeholders in Toms River.  Plans to meet State Assemblymen Wolfe and McGuckin and Senator Holzapfel in their Brick office are still pending. US Congressman Chris Smith and US Senators Booker and Menendez are expected to mail their congratulations during the course of the summer.  QUEEN Carolyn would welcome an entourage at any of her personal appearances.

Posted by Ms New Jersey Senior America at 8:01 AM No comments: