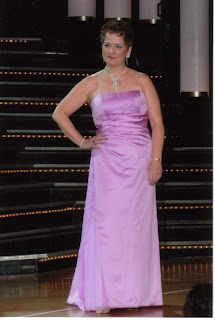 Little did the 3 Queens from the New Jersey Cameo Club realize how happy they made the members of the Ocean Township Rotary Club, on Wednesday, April 15th. Current NJSA Queen Jo Ann Gordon coordinated the appearance for the Rotary Club's weekly luncheon which was held at The Renaissance Hotel in Ocean Township. She asked Josephine Araniti, MS NJSA 2007, and Delores Puzio, MS DELAWARE SA 2008 to appear with her. The ladies were invited to a sumptuous lunch beforehand. They thought that the members who sat at their table were so interesting to talk to and were very gracious dinner companions.

Of special interest which occurred during lunch was a fun activity called "happy dollars". Any member could stand up and tell about what made them happy, or sometimes sad, and then offer as many "dollars" that they wished to. The dollars then go into the Club's treasury. That afternoon, one member after another welcomed the 3 Queens, putting in 3 dollars each time. Later, it was revealed that the ladies' presence helped to raise quite a bit of money.

Kudos to the 3 Queens. You made the "sisterhood" proud!
Posted by Ms New Jersey Senior America at 1:39 PM No comments: 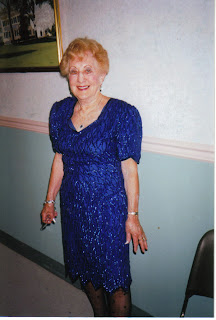 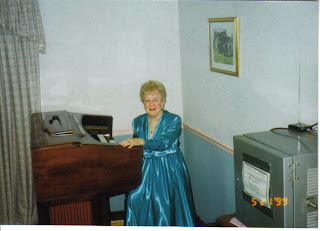 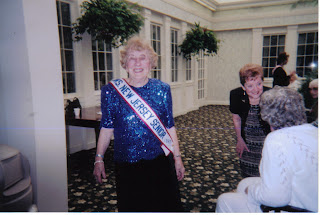 Elva Lawrence is a very special lady. At 92 years young, she is still a performing member of the New Jersey Cameo Club. An accomplished pianist, she delights audiences young and old with her surprise "twists" on the piano classics. At first, you think that you were in for 10 minutes of "long haired" music. Then, after a serious introduction, and a flurry of fanfares, she does a quick reversal, and plays one popular song after another, meshing each tune with the skill of a true artist. Eventually, her performance becomes a sing-a-long, and everyone has a great time singing together.

The following interview, which is done in Q & A format, reveals Elva's unique and interesting story:
Q: How did you hear about the MS NEW JERSEY SENIOR AMERICA PAGEANT?

A: Through Jan Dickenson, who was the New Jersey State Queen in 1986, and also MS SENIOR AMERICA 1986. We both lived in Leisuretown in Southampton. She became my coach, and helped me through many rough spots.

Q: How old were you when you entered the pageant, and where was the State pageant held?

A: 70 years young. The fabulous Resorts in Atlantic City.

Q: Is it true that you play the organ, piano, digital keyboard, and accordian?
Which instrument did you choose for your talent presentation?

A. Yes. Piano. I played the Warsaw Concerto, with a surprise ending, playing the music of Scott Joplin.

Q: I understand that you are one of the guest artists who
will perform at the MS NEW JERSEY SENIOR AMERICA PAGEANT 2009. How do you feel about it?

A. I am honored and humbled to be a part of the show, and I thank
our State Director Johanne Santori for choosing me. I am promising
a performance on the piano filled with new musical surprises
and twists, that will keep the audience humming and jumping!

Q: What was special in the year(s) following your reign?

A: In the year of my reign, I entertained regularly with
the NJ Cameo Club. Then, a year later, when Carol Einhorn,
also from Leisuretown won the State title 1988,
we received an invitation from the Burlington School District
to do educational programs. So, we formed a group called
"The Crown Jewels". It consisted of of we 3 Queens:
Jan Dickenson, me, and Carol Einhorn.
We toured the elementary schools there, on behalf of
NEW JERSEY SENIOR AMERICA. Our goal was to form
a bond with the younger generation. The shows were fun,
and the kids were so dear. Our program lasted for 3 years.
I am so proud to have had the chance to promote
the positive aspects of aging in this way.

Q: Besides your busy schedule with NJ Cameo Club, what is your life like today?

A: At the present time I play accordian with
the Sterling String Band, and we have many "gigs",
ranging from senior organizations, to civic groups.
Our fees are inexpensive, and people love danciing to our music.
I also sing tenor in a female barbershop group called,
"The Harmonizers".

Q: Sounds like your life is very full. Will you ever retire?

A: Not a chance. Slow down, maybe a little. Music has
always been part of my life, and I just can't imagine myself
not getting involved in one way or another.

Thank you Elva for being such an inspiration to us all.
We can't wait to hear you play at this year's pageant.

So....now that you have read Elva's wonderful story, please mark your calendars and come on down to cheer your favorite contestant on! Come hear Elva play, and enjoy other fabulous performers as well. The pageant promises lots of "glitter and glam", and the variety show is suitable for the whole family.

The title for today's article may sound like a product for removing stubborn stains and spots. But the play on words, describes exactly how we all felt on March 9th. Leisure Park in Lakewood, is a favorite place for the ladies of NJ Cameo Club to perform. The residents and staff are so kind, and look forward each year to our showcases.

Upon arrival that day, however, we noticed something was different ..... the building was on lockdown and we had to ring the doorbell. At first, we thought that it was a new security measure, but as we gazed through the glass doors waiting to be let in, we saw the staff walking around wearing masks, and rubber gloves. Also, there weren't any patients sitting around enjoying the sunshine and each other's company.

Eventually, a worker came to the door, and told us about an outbreak of stomach flu throughout the facility and suggested that we not come inside, and to cancel the show. We couldn't make that decision, since many ladies were travelling from a distance, and not everyone had arrived.

We give 2 shows there, one in the Revelations Unit, and one in Assisted Living. The activities director canceled the first show in Revelations, because too many residents were ill, but she decided to keep the second. We always play to a full house, but that day, only a handful of brave residents came to the cafeteria. They were so happy to see us, that they applauded especially loudly as if to make up for those who could not make it.

Delores Puzio, our "energizer bunny", managed to find a man to dance with her. His name was "Connie", short for Constantine, who told us that he had just turned 93 years young. He danced the twist, and then led Delores through some fancy turns. Way to go, Connie!

Kudos to our "Ambassadors of Love" for another high energy show. We all said a silent prayer before leaving, that we would not come down with the stomach flu. Luckily, in the days that followed, nobody did.
Posted by Ms New Jersey Senior America at 1:40 PM No comments: