NEW JERSEY CAMEO CLUB MOURNS THE DEATH OF A PAST QUEEN

Hearts were heavy with sadness when the ladies of the NEW JERSEY CAMEO CLUB learned of the sudden passing of Rebecca Orsatti, MS NEW JERSEY SENIOR AMERICA 2010, on Tuesday, October 7th.  To make matters worse, it was also announced that funeral services would be private, due to the global pandemic and public health concerns.  Services were held today at Holy Cross Cemetary, and Johanne Santori, Chairman/Ms. NEW JERSEY SENIOR AMERICA, INC. announced that she was the only one outside the family allowed to attend.  A celebration of Becky's life and legacy are on hold for the present, and plans by the family are forthcoming.

During the past week there were many Facebook notifications, in remembrance of Becky, by her "sisters"  in the NEW JERSEY CAMEO CLUB, who recalled the good times they shared with her over the years. It all began in the year 2010.  Although she lost her beloved husband Arnold that year, Becky Bobbins Orsatti found the courage to compete in the MS NEW JERSEY SENIOR AMERICA PAGEANT 2010, and won the title. 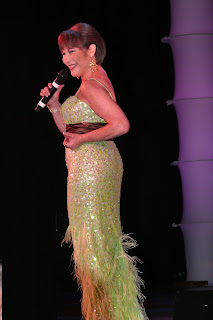 Born and raised in Atlantic City, Becky knew from an early age that she was destined to sing and perform.  Over the years, she realized her dream of a professional singing career, and appeared in New York City, Las Vegas, and California, to name a few.  At home in Atlantic City, she became a familiar performer in night clubs, and casinos, and at  MISS AMERICA PAGEANTS. 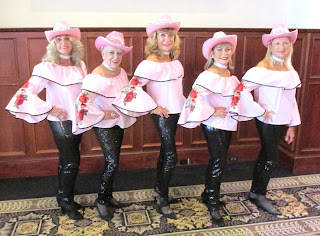 The NEW JERSEY ALL-STAR DANCERS, is a lively group that performs a variety of dance styles from tap to jazz, and  Becky was a founding member of the group.  One year, they did a western routine at a MS NEW JERSEY SENIOR AMERICA PAGEANT.

and with the QUEENS CHOIR, that performs at MS SENIOR AMERICA PAGEANTS. 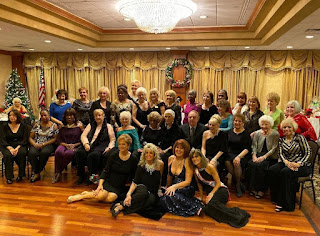 Membership in the NEW JERSEY CAMEO CLUB is by invitation only.   In order to join, a woman must have been a contestant in the MS NEW JERSEY SENIOR AMERICA PAGEANT.  As the winner in 2010, QUEEN Becky accepted the invitation.  She served as Treasurer for more than 8 years.  The last Christmas party in 2019, was great fun, and Becky was such a fun loving person to be with. 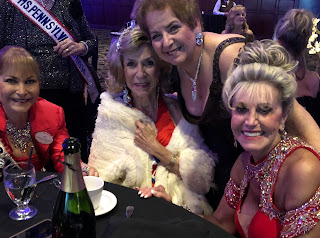 Special friends sat together at the MS SENIOR AMERICA PAGEANT 2019 Ruby Ball, when they were not on the dance floor.  Becky and buddies, Johanne Santori/'06, Jo Ann Gordon/'08 and Josephine Araniti/'07 smiled for a photo op.  The ladies celebrated the health of Johanne and her victory over a serious illness. 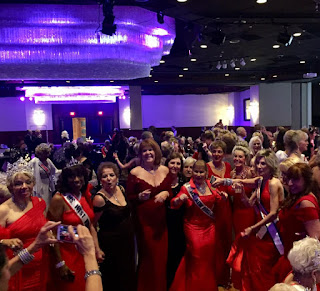 These girlz just want to have fun!  Becky and the girls rocked the night away.  She was glamorous and always brought life to the party.
Becky will be remembered as one who had a true impact on those around her.  Her smile let you know that she was there to support you when you needed her.  She was kind and loving to those she cared for, and the first one to protect her friends from gossip.  This past year, you spoke often about your wish to be with your beloved husband Arnie.  God granted your wish. Your time has come, and now, you can finally be happy and rest in peace!
Posted by Ms New Jersey Senior America at 1:32 PM No comments: