Carol Dugan, MS NEW JERSEY SENIOR AMERICA 2012, has been very busy this summer, with appearances, parades in the Garden State, and special events in Atlantic City.  Below is a brief recap of her activities, along with the members of the NEW JERSEY CAMEO CLUB, ﻿her newly found "sisterhood".  Carol is currently in California, where she and MS FLORIDA SENIOR AMERICA 2012, are the invited guests of the Susanne Somers Show.  They are videotaping a TV show for the Lifetime Network, which will be aired sometime in the fall.  Way to go girl! 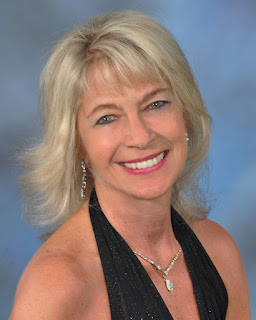 Classy Carol smiles brightly besides an equally classy convertible that she rode in at the July 4th Smithville parade. 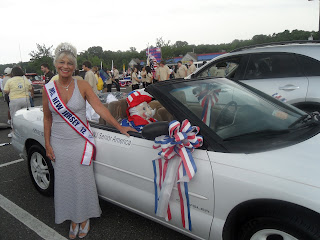 Carol received awards, letters and accomodations for her achievement by Local, County, State, and Federal politicians.  Here, she is with Freeholder Frank Formica, President of the Atlantic County Board of Chosen Freeholders 2nd District, as he reads the words of her proclamation. 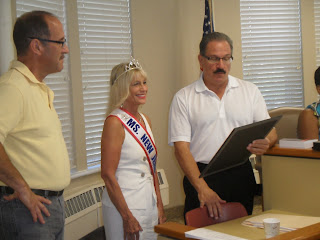 Meanwhile, Carol performed with her NEW JERSEY CAMEO CLUB "sisters" in a fabulous show at the Kennedy Mall, on the boardwalk in Atlantic City, on Sunday, July 22nd.  The ladies provided a variety show which included popular songs and an operatic aria, and dances of different styles. 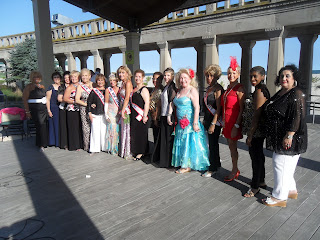 The July meeting of  NEW JERSEY CAMEO CLUB was for the purpose of welcoming Carol and the Class of 2012.  A special luncheon was prepared for them, and Carol was honored with a gift. It was also a time to say "goodbye" to Debbie Sidoti, MS RHODE ISLAND 2004, and a long time NJCC member.  She and husband Sam sold their home and are moving to Florida. The meeting concluded with a photo-op of the membership. 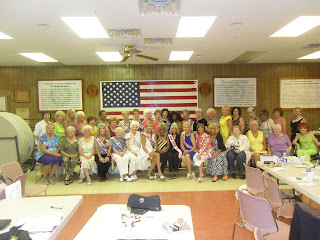 For dessert, there was s special cake. On the top, were printed 2 phrases: one to welcome Carol and the Classof  2012, and the other, words of farewell to Debbie Sidoti. Carol made the first cut. 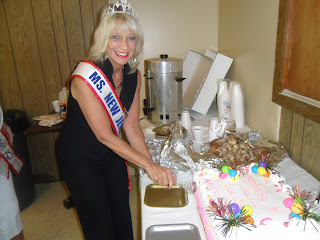 Since this article is a "SUMMER WRAP UP", some ladies of the NJ CAMEO CLUB have also been busy outside the pageant organization.  Dr.Sandra Greco, MSNJSA2003 & MSSA2003, who moved to Florida this year, sent a photo of her with a Sand Castle "pirate". 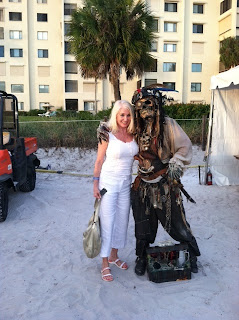 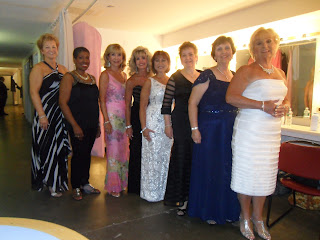 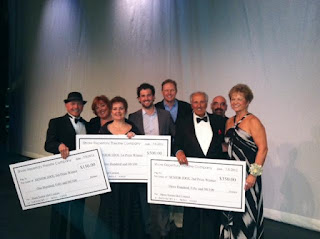 The biggest event "down at the Jersey Shore" was the ARMED FORCES PARADE & AIRSHOW, which was held Wednesday, August 22nd. The parade started at the SHOWBOAT HOTEL & CASINO, and ended at the ATLANTIC CLUB HOTEL & CASINO.  There were 145 groups that participated in the parade. The rainshowers cleared up just in time, and the stars came out to welcome both participants and spectators.  The ladies of the NEW JERSEY CAMEO CLUB performed a mini concert atop a colorful float that moved slowly and gently down the boardwalk.  They dazzled the enthusiastic crowd with a saucy rendition of "BROADWAY LADIES", a medley of 3 songs, "We're In The Money, Big Spender, and Whatever Lola Wants". 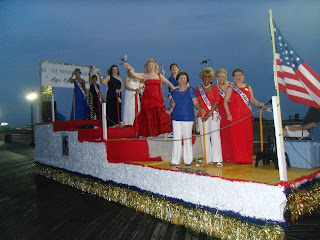 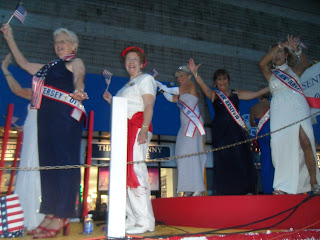 Her "rock style" really rocked the crowd!  Here she is singing "We Are Family", while the ladies also rocked to the beat and waved their flags.  The mini concert included 5 songs in all, and was repeated 5 times.  It was a great night ... the ladies shined and were at their best.  This was the first time they actually entertained on a float.  In prior parades, they looked beautiful, and waved and smiled as they passed by.  But the addition of musical performance added more depth and excitement, and showcased the ladies' talents.
All this was made possible by the efforts of one man ... one very special man and his IPOD technology ... John Dugan.  Thank you, John, for giving us the gift of your expertise, and time.  Last, but not least, kudos to our leader,  Johanne Santori,  MS NEW JERSEY SENIOR AMERICA STATE PAGEANT DIRECTOR,  for finding and arranging this wonderful venue which gave so much pleasure to all, and allowed these elegant ladies to express their God-given talents.
Posted by Ms New Jersey Senior America at 8:59 PM No comments: