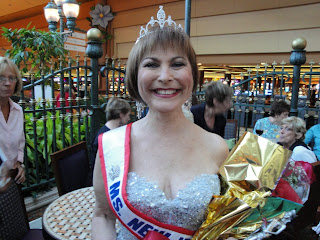 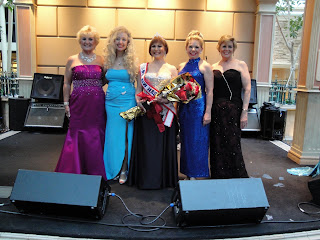 The search to find that "gracious lady who best exemplifies the dignity, maturity and inner beauty of all senior Americans" has ended. On Thursday June 3rd, the MS NEW JERSEY SENIOR AMERICA PAGEANT 2010 was held at Harrah's in Atlantic City. The Class of 2010 was made up of thirteen elegant ladies, all very impressive, as each contestant dazzled both judges and audience with her unique display of charm, witt, intelligence, and beauty. The crowd kept their own scores, and cheered along for their personal favorites, but in the end, everyone knew that the fate of these women rested in the judges' hands.

A hush fell over the audience in the Concert Venue Theater as the MS NEW JERSEY SENIOR AMERICA PAGEANT 2010 was drawing to an end. The ladies entered the stage for the final time, dressed again in fashionable evening gowns, and each one was awarded a single rose. They stood tall, smiling broadly, and anxiously awaited the judges' decision.

Finally, their names were called, beginning with the runners up to comprise the QUEEN'S COURT, ending with the reigning queen: BETTY PRUITT, hometown/Marmora, 4th Runner up; LEAH J. WHELAN, hometown/Southamptom, 3rd Runner up; MARTI NOEL-STIER, hometown/South River, 2nd Runner up; PATRICIA GENOVESE, hometown/Dover, 1st Runner up; and REBECCA ORSATTI, hometown/Atlantic City, MS NEW JERSEY SENIOR AMERICA 2010. Everyone clapped and cheered for Becky, as she is affectiontely known, while she quickly donned her crown, banner, and was handed a trophy and a bouquet of red roses. She took her traditional walk across the stage, waving and throwing kisses to the adoring crowd. The scene that ensued was one of general, but happy mayhem, as family, friends, admirers and well wishers, ascended onto the stage to congratulate their new queen, and to take pictures.

Immediately following the pageant, a gala reception was held for the Queen and her Court in the Eden Lounge. However, Queen Rebecca had to leave the reception early, in order to attend her first TV interview. Kathy Orr, weatherlady at Channel 3 News, Philadelphia hosts a special show on Thursdays called "Down the Shore". In between the weather, she does special news segments about what's happening at various New Jersey and Delaware shore towns. On Thursday June 3rd, she and CBS3 News Philadelphia crew were on the boardwalk in Atlantic City in front of the Rain Forest Cafe. Ms Orr heard about the MS NEW JERSEY SENIOR AMERICA 2010 PAGEANT, and wanted very much to interview the newly crowned queen. Becky was interviewed live at 6:15 pm, but anyone wishing to see her can log onto CBS3.com.