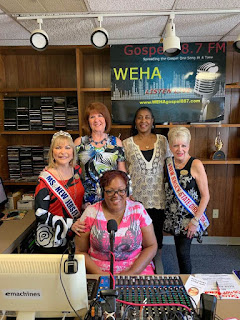 Our four envoys promoted the positive aspects on aging very well.  Dr. Thelma Witherspoon  attended this year's Pageant and was very impressed at what she saw, and  she made her views known on this morning's show.   Kudos to all!


The Age of Elegance was the subject of an interview on the show, "In The Community", hosted by Dr. Thelma Witherspoon.  The broadcast aired at 9:00  AM this morning on WEHA radio 88.7 FM and 100.3 FM in Atlantic City.  She and 4 invited guests spent a lively hour talking about the MS NEW JERSEY SENIOR AMERICA PAGEANT  and the NEW JERSEY CAMEO CLUB.

On hand for the discussion were: Terry Meade, Executive State Pageant Director, Rebecca Orsatti, MS NEW JERSEY SENIOR AMERICA 2010, and NEW JERSEY CAMEO CLUB Treasurer; Denise Mechan, NEW JERSEY CAMEO CLUB Showcase Director; and Donna King, 2019 Contestant and 2nd Runner Up.  The ladies explained most eloquently and clearly every facet of the 2 organizations, and  Donna King shared her experiences as a contestant.  During the show Thelma asked Becky to entertain the listening audience, and she gave a sample of "Don't Rain on My Parade".

For those who missed it, the interview was also streamed live, and can be viewed anytime by clicking this website: www.wehavegospel.com.  Once on their homepage, click on the f icon, which will take you to their Facebook page, and then click on the video thumbnail.

The ladies were great examples of life after 60, that a Pageant exists especially for them, and they encouraged women in the listening audience to get "out of the rocking chair and onto the runway".

BRIDGING THE GENERATIONAL GAP WAS SO MUCH FUN!


The fabulous ladies of the NEW JERSEY CAMEO CLUB were out in full regalia to volunteer for a worthwhile cause, and combined their talents with the Applaud Our Kids Foundation to help raise money for their scholarship program.  The evening show was held at the Laurita Winery in New Egypt, on Thursday, June 14th.  The two groups gave a two hour show of great music from Broadway, movies, and the classics.  Each performer was unique in their own vocal style and song delivery, and the audience appreciation ranged from generous applause to standing ovations. 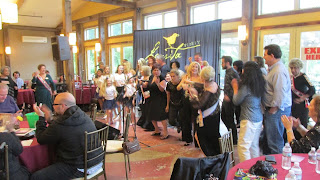 Dr. Debra Canale, MS NEW JERSEY SENIOR AMERICA 2019, rocked the house with her dance routine.  Although she is not in this photo, the results of her routine are highly visible.  She went out into the audience and encouraged everyone to dance.  Many from six to ninety plus, came up to the stage to clap, bump and grind, showing off their own individual styles. 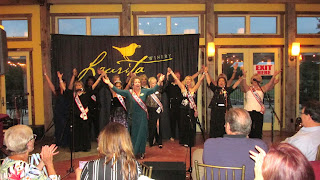 The GRANDE DAMES CHORUS is a benefit that is open to the members of the NEW JERSEY CAMEO, who like to sing.  It was formed in 2008, and is under the direction of Josephine Araniti/MSNJSA'07.  They opened the second half of the show with, "With Love, From Motown",  a 3 song medley which included: Baby Love, Where Did Our Love Go?, and Stop! In the Name of Love. 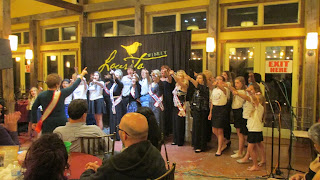 The finale of the evening was when the 2 groups teamed together and performed "Broadway Blockbusters", a 5 song medley which included: "One", from A Chorus Line; theme song from Beauty and the Beast, "Tradition", from Fiddler on the Roof'; "Sun and Moon", from Miss Saigon; and "Do You Hear the People Sing?" from Les Miserables. 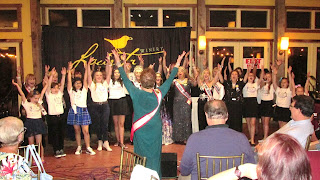 As the medley ended, both groups joined hands together, and proudly received a standing ovation for their stirring performance.

Much hugging, kissing and handshaking occured after the show, followed by a photo op by parents and well wishers.  It was a night to remember, a great way to bridge the generational gap, and to be of service to such talented children.
Posted by Ms New Jersey Senior America at 12:51 PM No comments:


There they are. The 2019 QUEEN and her Court. That's how it all ended on Wednesday, June 5th at Harrah's Resort Hotel and Casino.  But, who are these 5 lovely women and how did their story begin?  How did they find out about the MS NEW JERSEY SENIOR AMERICA PAGEANT 2019, and who inspired 11 ladies to become contestants?  Perhaps they read about the Pageant in their hometown newspaper, or perhaps they were self motivated, so they Googled "pageants" until they found the MS NEW JERSEY SENIOR AMERICA PAGEANT website.  Maybe a NEW JERSEY CAMEO CLUB member invited someone they knew, or, the ladies who were in the Pageant before decided to enter again. 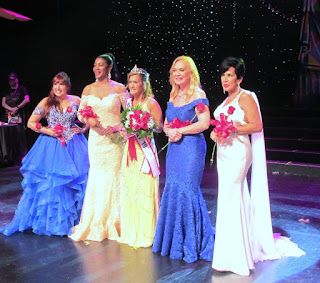 Successful pageants are usually the result of a year-long plan by one person with a dream.  The MS NEW JERSEY SENIOR AMERICA PAGEANT Organization is proud to have as its STATE PAGEANT DIRECTOR, one such lady, Terry Meade.  Over the course of the year, she worked tirelessly over the phone and on the internet, screening applicants, until she found 12 contestants. 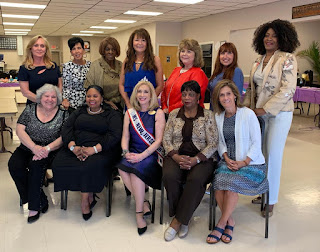 In April, they met altogether for the first time, at a Meet the Contestants Luncheon, which was hosted by the officers of the NEW JERSEY CAMEO CLUB.  Seated from left to right are: Millie Tate/Linwood, Deborah Britt/Mays Landing; QUEEN Suzie Neustadter 2018; Nancy Bassett/Lakewood; Dr. Debra Canale/Medford.  In the second row from left to right are: Denise Ely/Red Bank; Bettyjean Pace/Toms River; Wirta Armstrong/Oakhurst (withdrew); Debra Paradiso/Morristown; Roxanne Terramagra/Egg Harbor City; Dale Browndorf/Margate; and Donna King/Red Bank.  Not in photo is Imogen Brown/Trenton. 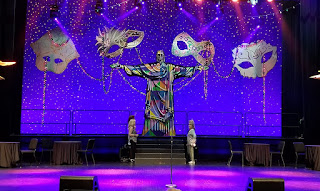 When the contestants arrived for rehearsal at the Concert Venue Theater, they were overwhelmed by the beautiful stage set.  Terry's vision for this year's theme was finally realized - a Rio Carnival! 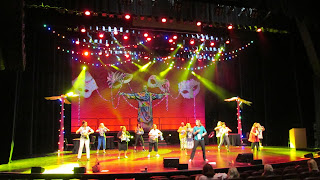 Rehearsal began Tuesday morning at 9:00 AM, and lasted until well after 3:00 PM.  The contestants were groomed and coached on how to present themselves as best as they could.  The production number was a latin dance to "Hot, Hot, Hot", which was choreographed by Melanie Brough. 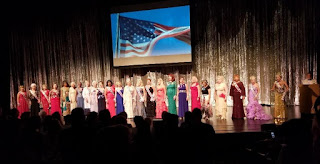 The Pageant began with the patriotic medley, "This is My Country and God Bless America", sung by the ladies of the NEW JERSEY CAMEO CLUB, and signed by Jo Ann Gordon/MSNJSA2008. It was announced at the podium that the program was dedicated to Johanne Santori, MSNJSA'06, and ADMINISTRATOR of the MS NEW JERSEY AMERICA PAGEANT Organization, and well wishes were sent out to her for a speedy recovery. 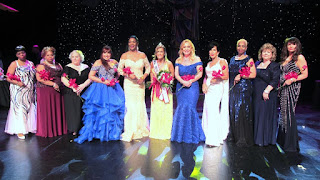 Then the Pageant began, and as is plainly seen, these ladies morphed from ordinary to extraordinary! They came in all shapes and sizes, and their gowns showed them off most beautifully.  Imogen Brown, who was absent in the Class of 2019 photo above, is the 3rd lady in on the right.  The Talent Portion of the program had variety, and included singers, dancers, a photography exhibit, a self defense demonstration, and gymnastics. 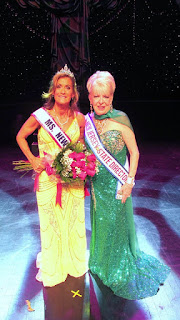 In the end, it was Dr. Debra Canale, who emerged as this year's winner.  An accomplished gymnast, Debra impressed both the audience and a panel of distinguished judges in the art of pole sport.  Her grace and agility were amazing as she swung effortlessly around and atop the 15 foot high pole, which ended with a slide down to the floor into a perfect split. NEW JERSEY STATE PAGEANT DIRECTOR Terry Meade posed proudly with her new QUEEN.  She stands ready to lead Dr. Debra on her year-long journey as she travels throughout the Garden State, promoting the positive aspects on aging. 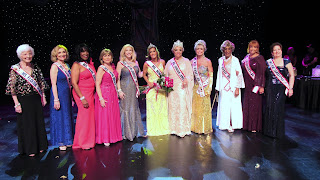 Post Pageant is time time for many photo-ops.  It is the way to keep alive the memories of this memorable day, for not only the new QUEEN, but for all those who keep the traditions of the MS NEW JERSEY SENIOR AMERICA PAGEANT Organization alive.  QUEEN Debra is joined by some past QUEENS who were able to attend this year's Pageant. 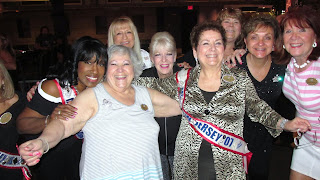 Afterwards, fun and merriment abounded in the Eden Lounge, as everyone danced to the music provided by Steve and Debbie Berger. 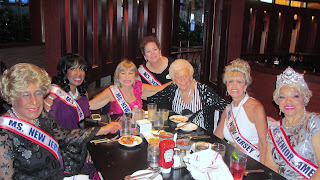 In the evening, 45 people ate a wonderful 4 course dinner at the Coastal Kitchen, which provided another opportunity for good fun and fellowship. Many thanks to Denise Mechan, who called ahead to make the reservations and got a special menu with a fixed price.

As the song says, "It Was A Very Good Year", and all of it is due to the  talent and imagination of one woman, NEW JERSEY STATE PAGEANT DIRECTOR, Terry Meade, who, in the course of one day, made magic happen for many people!
Posted by Ms New Jersey Senior America at 10:18 AM 1 comment: