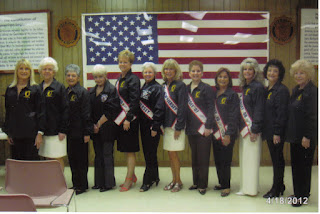 This year marked the debut performance of THE GREAT DAMES CHORUS.  The photo above was taken at a rehearsal last March, at the American Legion Post 166, in Lakewood, when the members decided to wear club jackets.

Could it be the fresh, salty sea and air, or the proximity to Atlantic City shows, that afford area women the opportunity to become astute students of performance better than women in other parts of the Garden State?  Whatever the reason, Atlantic County women just "seem to do it better," and the crown remains there for the 3rd year in a row.

On Thursday, June 7th, the 42nd MS NEW JERSEY SENIOR AMERICA 2012 was held at Harrah's Resort Hotel and Casino, in the Concert Venue Theater, and the winner is ... Carol Dugan!

A resident of Ventnor City, Carol Dugan has an impressive biography which includes: volunteer work for many worthy causes; as well as membership in several community and nationally based organizations, in which she serves the elderly, homebound patients, and people on hospice, creating and implementing fitness programs and massage.

Carol sang a stirring and uplifting patriotic medley for the TALENT  portion of the pageant.  Her performance was powerful and quickly won the hearts of both a distinguished panel of judges, and an enthusiastic audience. A petite woman, Carol looked radiant, and spoke eloquently, for the PHILOSOPHY OF LIFE/EVENING GOWN portion.

Carol Dugan is indeed the embodiment of the MS NEW JERSEY SENIOR AMERICA PAGEANT organization's philosophy, which is, to promote the positive aspects of aging to our State's Senior Americans.  All of us extend our best wishes to Carol as she begins her busy year, traveling from one end of the State to the other, and also to prepare for the national pageant in October.

Besides the competition, the audience was treated to performances by former State and National Queens, and the debut performance of THE GREAT DAMES CHORUS, under ther direction of Josephine Araniti, MSNJSA2007. They sang a medley of familiar broadway songs that included, "We're in the Money, Hey, Big Spender, and Whatever Lola Wants."   The whole production was conceived and skillfully produced by Johanne Santori, MS NEW JERSEY SENIOR AMERICA STATE PAGEANT DIRECTOR.