The City of Atlantic City invites the NEW JERSEY CAMEO CLUB to give 2 showcases during the summer.  The first show was on July 7th on the stage of Kennedy Plaza, located opposite Boardwalk Hall, on Mississippi Avenue.  In spite of the humid weather, an ample crowd of vacationers filled the seats of the outdoor theater for the 5:00 PM show.

The following comments were submitted by on-site reporter Terry Meade, NJCC member and performer, and her husband Mark, who took the photos.


"Our NEW JERSEY CAMEO CLUB SHOW performance was fantastic ... everyone was at the top of her game.  Wonderful audience who sinerely enjoyed  the show". 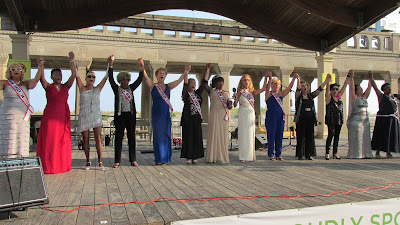 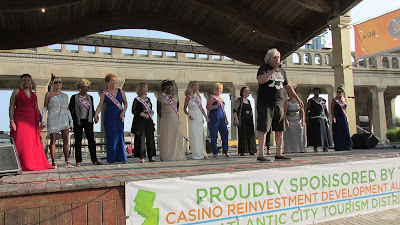 "The Sound man MIKE, who worked with ELVIS for 5 years, joined us for our finale, and we were his back up group.  Great fun"! 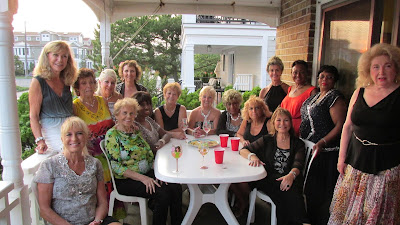 "Our MS NEW JERSEY SENIOR AMERICA STATE PAGEANT ADMINISTRATOR & DIRECTOR, Johanne Santori, and her wonderful husband Adeo, had us all back to their beautiful home for a lovely dinner and an evening of relaxing and fun.  They are both so very gracious hosts".

Thank you Terry and Mark for submitting this article to the Age of Elegance blog from your grateful editor.
Posted by Ms New Jersey Senior America at 4:57 PM No comments: 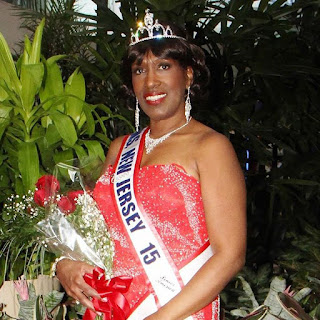 Since her coronation on June 3rd, Sherri McGhie, MS NEW JERSEY SENIOR AMERICA 2015, has begun her year long journey of promoting the positive aspects on aging in the Garden State.   So far, she has kept her work schedule and duties as Queen in balance, and she is having the time of her life.

Lawmakers from all levels of government have recognized Queen Sherri for her achievement, with letters of congratulations, and official proclamations. 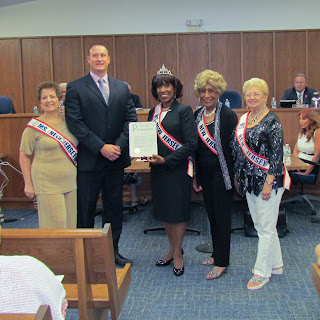 Earlier this month, Sherri met with the members of the Manchester Town Council at the bi-monthly open meeting.  President Brendan Weiner, President presided over the meeting.   He introduced Sherri to the residents, and read the Proclamation of Achievement, in lieu of Mayor Palmer, who was absent.   The photo also includes Sherri's entourage: Josephine Araniti/MSNJSA2007, her mother, Norma McGhie/MSNJSA1995, and Patricia Oraveta/MSNJSA2001. 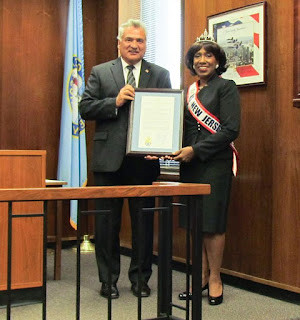 The Ocean County Board of Chosen Freeholders were also eager to honor Queen Sherri.  She was invited to their monthly open meeting in Toms River, where President Joe Vicari presented her with a beautifully framed Proclamation of Achievement of Appreciation. 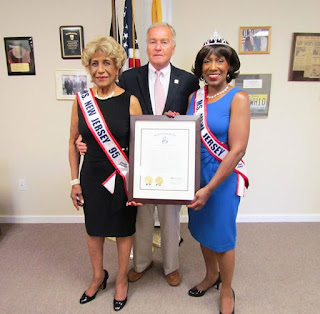 Wow!  Each plaque gets bigger than the previous one!  Queen Sherri and her Mom pose with David Wolfe, New Jersey State Assemblyman, 10th Legislative District, in his office at Republican Headquarters in Brick.  Other recognitions include congratulatory letters from: Governor Chris Christie, US Congressman Chris Smith R, and US Senator Robert Menendez, D.  Still awaiting, is recognition from US Senator Corey Booker, D. 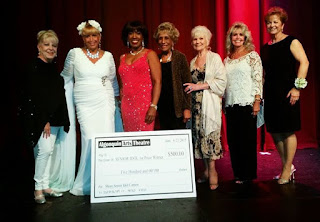 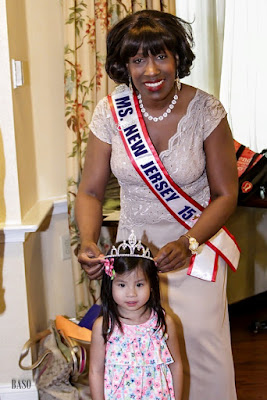 Will this lovely child become a future beauty queen?  When Queen Sherri sang at Brightview last month, a little girl was sitting in the audience with her grandmother.  After the show, Sherri placed her crown her head. 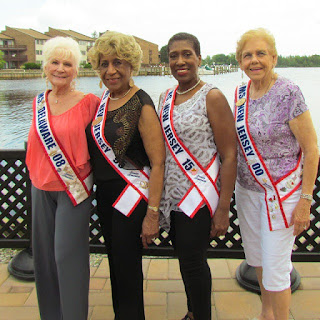 Queen Sherri did take some time off for R&R.  She and past Queens and NEW JERSEY CAMEO CLUB sisters, Delores Puzio/MSDESA2008, her mother, Norma McGhie/MSNJSA1995 and Lyn Gibson/MSNJSA2000,  enjoyed a lazy summer day and dined at Water Street Grill in Toms River. 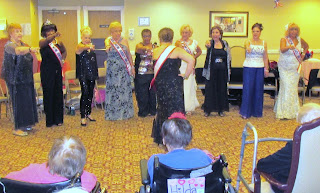 Queen Sherri, second from the left, sings along with her NEW JERSEY CAMEO CLUB sisters at Care One in Jackson.  They opened the show with "Broadway Ladies Medley",   a lively number of familiar songs that include: We're In The Money, Big Spender, and Whatever Lola Wants.  The ladies pictured in this provocative gesture are from let to right: Joan Kaplan, Queen Sherri/MSNJSA2015, Terry Meade, Brenda Christian, Leah Whelan/MSNJSA2011, Renee Tompkins, Carol Rosario, and Diane Beebe/MSNJSA2014.  They were directed by Josephine Araniti/MSNJSA2007.

And so, she is off!  As Queen Sherri continues her journey, she brings joy and happiness to all she meets.  In return, her constituents wish her well as she prepares for the MS SENIOR AMERICA National Pageant, with the hope that she will win the national title.
Posted by Ms New Jersey Senior America at 10:57 AM No comments: 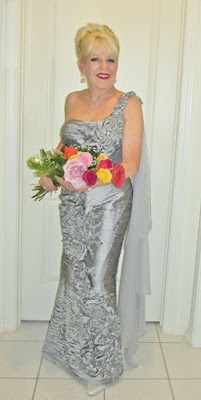 Terry Meade, of Princeton Junction, participated in the MS NEW JERSEY SENIOR AMERICA PAGEANT 2014.  Since then, she joined the NEW JERSEY CAMEO CLUB, and performs regularly in their showcases. 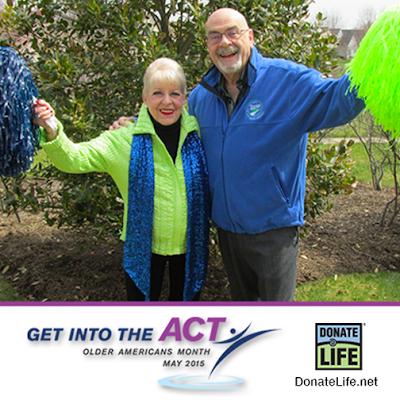 Terry Meade and her husband Mark of 50 years, have been selected by the New Jersey Sharing Network Foundation, and will be their guests in Pasadena, California, as 2016 honorees on the DONATE LIFE Rose Parade float on New Year's Day!

On June 4, 2008, then 64 years old, Mark received the "gift of life", a new heart.   Since 2005, Mark had suffered numerous heart attacks, and was in end-stage congestive heart failure, when he was admitted to Hahnemann University Hospital in Philadelphia, where he waited 4 months for a heart.

Since his transplant, they are committed to raising awareness of the critical need for organ and tissue donations.   Mark and Terry honor their donor in everything they do ... every day!  They are passionate advocators, and trained and certified volunteers, for the NJ Sharing Network, Gift Of Life Donor Program, American Heart Association, American Diabetes Association, and NY Donor Program.  Terry and Mark speak on behalf of these organizations about the transplant process from the perspective of the recipient and caregiver. 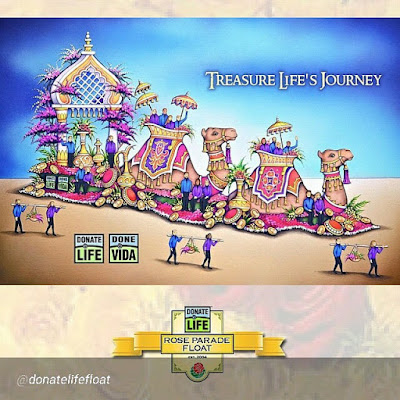 Mark will join 23 honored recipients, and will ride on the float in honor of the heart transplant he received.  Being selected as a recipeint float rider at this year's Rose Parade is the highest honor and another way to continue sharing their story and to raise awareness.

Terry and Mark know how lucky they are to have had this outcome ... many others are not as fortunate.  Please register to be an organ donor and encourage others to do the same.  Without receiving the "ultimate gift",  none of this would be possible for the Meade family.