There she is!  Sherri McGhie, from Manchester/MS NEW JERSEY SENIOR AMERICA 2015.

Fifteen ladies graced the stage at Harrah's Casino Resort Hotel and Casino, on Wednesday, June 3rd, and participated in the MS NEW JERSEY SENIOR AMERICA PAGEANT 2015.  Since 1971, the time-honored Pageant has given honor to women who have reached the "Age of Elegance". 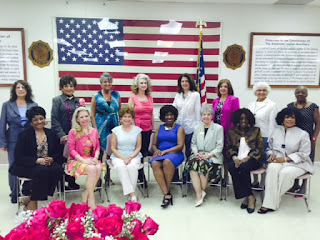 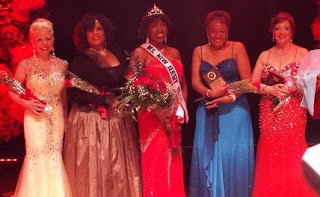 The ladies of the QUEEN'S COURT 2015, from left to right are: Patricia Marie Genovese/3rd Runner up; Beverly Withers-Gibbs/1st Runner up; QUEEN Sherri McGhie; Virginia Campbell/2nd Runner up; Carol Ann Rosario/4th Runner up. 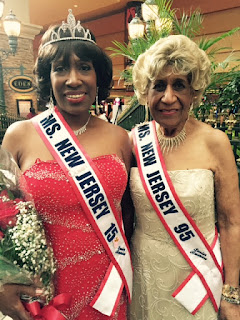 For the first time, the MS NEW JERSEY SENIOR AMERICA PAGEANT has a "mother/daughter dynasty".  Norma has been an inspiration to Sherri since she won the title in 1995.  Sherri has been waiting to enter the "Age of Elegance" for 20 years. 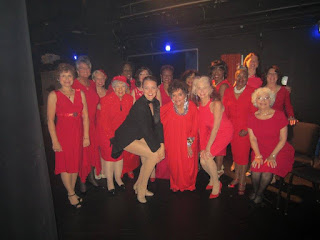 The opening number was "Lady In Red", and was choreographed by Megan Brough.  The ladies took a moment before going onstage to pose for the photographer.  Kudos to Megan for once again creating a number that showed the contestants at their best. 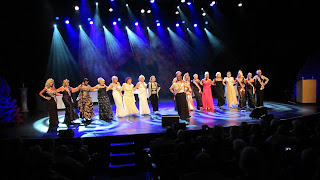 The MSNJSA PAGEANT 2015 was also a great variety show.  One group, in particular, was the GRANDE DAMES CHORUS.  The group consists of State QUEENS and NEW JERSEY CAMEO CLUB members, and is under the direction of Josephine Araniti/MSNJSA 2007.  The audience rewarded  their performance of the medley, "Broadway Blockbusters", with rowdy cheers, shouts, and exhuberant applause. 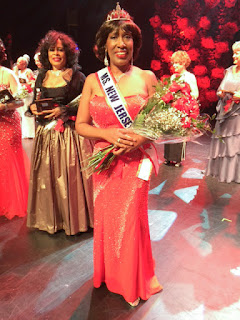 After the Pageant all pandemonium broke out, as the media, and families and friends poured onto the stage of Harrah's Concert Venue Theater.  At that time, Sherri and the CLASS OF 2015, accepted hugs, kisses, and well wishes.  Here she is smiling in one of  many candid shots.  Apre Pageant onstage is a feeding frenzy for not only the official photographer, but anyone who carries a camera or smart phone.

Once again, Johanne Santori, MS NEW JERSEY SENIOR AMERICA STATE PAGEANT ADMINISTRATOR/DIRECTOR, produced an elegant Pageant.  Together with co-host Dr. Sandra Greco, MSNJSA 2003, and MSSA 2003, they kept the show running smoothly.  Commediene Helen Halpin-McCarney/MSSA2005(NY), was on hand, and provided the chuckles and laughs with her always amusing comedy routine.  Dr. Al Mott, founder of the MS SENIOR AMERICA PAGEANT, spoke eloquently about the meaning and purpose of the organization.  Outgoing QUEEN, Diane De Salvo Beebe, gave a slide show of her fabulous year, and sang "Thank You For The Music", from the Broadway musical, Mama Mia.  Her song selection was so appropriate for the occasion.

The coming year will be a busy one for Sherri McGhie/MSNJSA2015.  She will travel the State promoting the positive aspects on aging, on radio and TV, and parades and conventions.  Both the QUEEN and her COURT will be the featured performers in the NEW JERSEY CAMEO CLUB SHOWCASES.   In October, she will participate in the MS SENIOR AMERICA PAGEANT 2015, which will be held at Resorts.  Congratulations on winning the Crown, and may you have a happy reign!