The 3rd quarterly meeting was held yesterday at the Manahawkin Elks Club.  The meeting was especially exciting and meaningful to the ladies of the NEW JERSEY CAMEO CLUB, because it's the time when they get to meet and interact with their new QUEEN on a more personal level.  There was laughter and song as the ladies gathered and found their seats, and followed by a sumptuous luncheon.  Dessert and coffee was served during the photo op session. 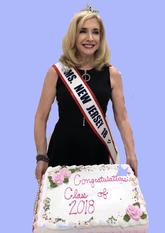 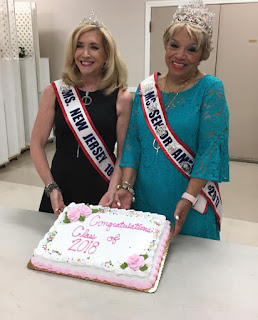 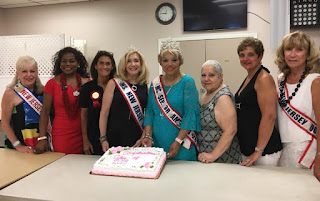 The ladies of the QUEENS COURT, were joined by: New Jersey State Executive Pageant Director Terry Meade, and New Jersey State Administrator Johanne Santori.  Next to Terry is: Sheila Jackson/3rd Runner up; Debra Canale/1st Runner up.  Next to QUEEN Carolyn is: Millie Tate/2nd Runner up; and Jeri Georger/4th Runner up.  The QUEEN and her COURT will be the featured performers in all NEW JERSEY CAMEO CLUB SHOWCASES during 2018. 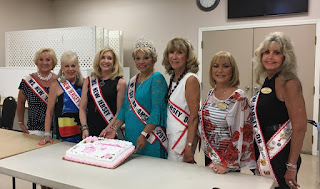 The two QUEENS were joined by the ladies of the board of the NEW JERSEY CAMEO CLUB. On the far left is Leah Whelan/MSNJSA2011, Secretary, and after Johanne is Rebecca Orsatti/MSNJSA2010, Treasurer, and Jo Ann Gordon/MSNJSA2008, Vice President.  Absent from the photo is President Carole Lelli. 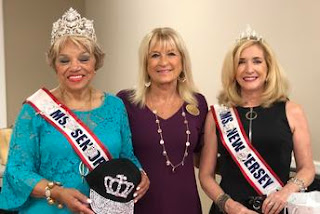 NJCC President Carole Lelli, thanked both QUEENS for their tireless efforts to bring happiness and joy to the residents of the Garden State.  She presented them with gifts on behalf of the NEW JERSEY CAMEO CLUB. 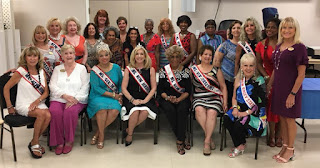 There they are! The fabulous ladies of the NEW JERSEY CAMEO CLUB in their official photo with QUEENS Suzie and Carolyn.

The meeting that followed was especially stimulating and informative, with many suggestions regarding the growth and future prospects for the PAGEANT & the CLUB. 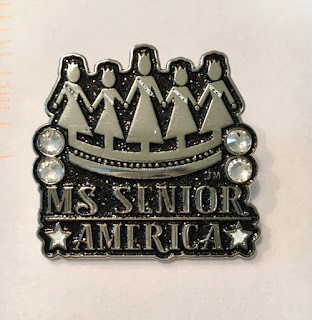 photo, courtesy Terry Meade
Pageant Director, Terry Meade described the lastest initiative from their parent organization, MS SENIOR AMERICA, INC.  A pin was designed to represent an updated  image of the Pageant, and was available for immediate purchase for the price of $10.00.

Although everyone had a happy time at the meeting, it was noted that the attendance was lower than usual. Administrator Johanne Santori had the sad duty to report on the health of several long time members who are ill, and who really are in need of much prayer.

President Carole spoke about the upcoming MS SENIOR AMERICA PAGEANT 2018, scheduled for the week of Sunday, October 14th, through Thursday, October 18th.  QUEEN Suzie needs all the support she can get.  All members need to go to the national website at: www.senioramerica.org., for the list of events and activites during Pageant Week.

GOOD LUCK TO QUEEN SUZIE at the Pageant and in the year ahead!
Posted by Ms New Jersey Senior America at 12:22 PM No comments: