NEW JERSEY CAMEO CLUB MEMBER TO BE INTERVIEWED ON RADIO


The radio airways will come alive once again on Sunday morning, when the NEW JERSEY CAMEO CLUB'S newest "sister" , will share her amazing story of how her life was saved by a miraculous gift. Denise Ely will be the guest of Shelli Sonstein, whose show airs on Q104.3 i Heart New York Radio, or on Sonstein Sessions podcast on the i Heart Radio app.  The show airs at 6:55 AM, and Denise's previously taped interview will begin at approximately 7:15 AM.

Denise shared her story onstage on June 5th, when she participated in the MS NEW JERSEY SENIOR AMERICA PAGEANT 2019, at Harrah's, where she came in 1st Runner Up in the competition.  She managed to explain in a 35 second Philosophy of Life speech, the importance of organ transplants to those who are dying of need.  She sang the song "I will Survive", for her Talent presentation, because the lyrics pertained to how she dealt with the disastrous diagnosis of a failing liver.

Not only was she was saved by a liver transplant, but at age 52, she turned her life around and left Wall Street, went back to college and got a degree in nursing.   Since then, she has become an avid advocate for the need for organ transplant awareness, and has appeared on many TV and radio programs.

Here is a better view of host Shelli Sonstein.  Another guest on her show was Eliss Glennon.

The NEW JERSEY CAMEO CLUB claims 2 beautiful ladies as spokeswomen for the New Jersey Organ Sharing Network, Terry Meade, New Jersey State Executive Pageant Director, on behalf of her husband and our dear friend Mark, and Denise Ely on behalf of herself.  Thank you for the work that you do.
Posted by Ms New Jersey Senior America at 1:36 PM No comments:


When the fabulous ladies of the NEW JERSEY CAMEO CLUB met on Thursday for their 3rd quarterly meeting at the Manahawkin Elks Lodge, little did they know of the afternoon's daunting agenda that awaited them.  After the Pledge of Allegiance, everyone enjoyed a lunch of sandwiches, salads, fresh fruit and cut melons and beverages, while the chatter of lively conversations filled the room.  Since the members come from all over the State, the chance to talk face to face with each other far exceeded talking by phone or texting.  In the background, the "Andrew Lloyd Webber Celebration" medley could be heard on the boombox, a subtle reminder of what the Grande Dames Chorus will be singing at next year's Pageant.

As noontime approached, President Carole tapped the gavel, and called the meeting to order, and announced that there was a very full agenda for the afternoon.  Secretary Leah read the minutes of the last meeting, Treasurer Becky gave her report, and then the Committee Reports followed.   All in all, the information was disseminated to the members in a clear, precise and need to know manner.

New Business came next and the first item was the update of the NEW JERSEY CAMEO CLUB Constitution and By-Laws.  Each member received their copy, and it was read and aloud.   A short discussion followed regarding the need to update the by-laws in order to meet changing times and the CLUB'S current needs.  The membership approved the changes by a unanimous vote.

The second item was the NEW JERSEY CAMEO CLUB Code of Ethics.  President Carole explained to the members that it is standard practice for most clubs and organizations to have one, but the NJCC did not.  So, the Board appointed a committee to develop such a document.  Each member received 2 copies.  The item was read aloud, and a short discussion followed.   One copy was theirs to keep, and the other was signed, dated and returned to the board.  It was accepted by a unanimous vote by the membership.  Both documents will be mailed to the members who were not at the meeting.

QUEEN Debra spoke and gave thanks to all those who have been supportive of her.  She gave a gift to each Cameo sister to take home.  The Board presented her with gifts as well. 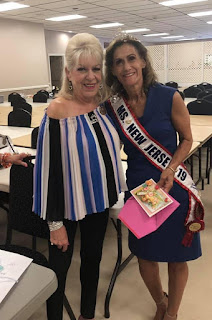 Terry Meades, New Jersey State Executive Pageant Director, showing smiles of approval, after QUEEN Debra received one of her gifts, an envelope with a check from NEW JERSEY CAMEO CLUB Board. 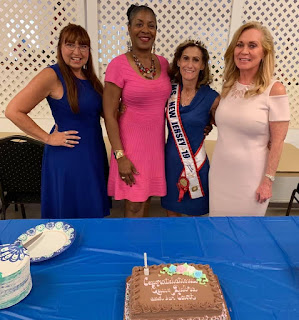 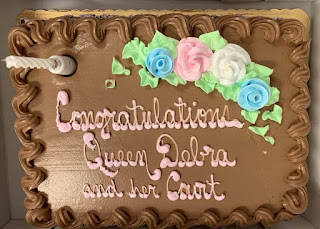 The QUEENS COURT gift was their special (and delicious) cake.  The filling had chocolate pudding.  YUM! 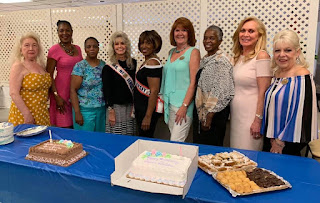 The CLUB also remembers and celebrates it members' birthdays.  These ladies birthdays fall during the summer months.  From your left are: Maria Crowell/September; Donna King/July; Nancy Bassett/July; Jo Ann Gordon, MSNJSA'08/July; Sherri McGhie, MSNJSA'15/August; Denise Mechan, NJCC Showcase Coordinator/July; Wenonah Brooks/July; Denise Ely/September; and Terry Meade/NJ State Pageant Executive Director/July.  What an impressive array of ageless beauties!   Diane Beebe/MSNJSA'14, who was on vacation, read this article, and informed this writer that her birthday is in September. 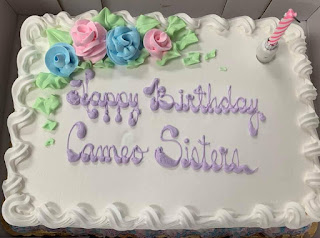 Their birthday cake was equally yummy and delicious.  The filling inside of this one was vanilla custard.  Jo Ann Gordon also brought her homemade desserts.

President Carole had a hard time adjourning the meeting because everyone busy eating cake.  Nonetheless, amid the talking and laughing, someone yelled "aye" and another seconded it!   Kudos to all who made the day memorable.
Posted by Ms New Jersey Senior America at 10:14 AM No comments:


This summer has been sizzling on many fronts so far, particularly for Dr. Debra Canale, MS NEW JERSEY SENIOR AMERICA 2019, who has begun her year-long journey of appearances at different age related venues in The Garden State.  Despite their physical limitations, she got people up and moving at assisted living facilities last month. 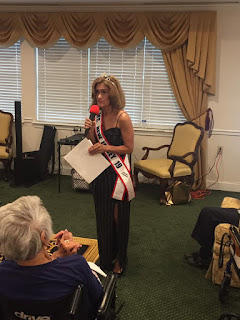 At Brandywine Senior Living in Pennington, QUEEN DEBRA arrived in gym attire and performed her athletic routine.  Afterwards, she changed into a stunning blue gown, and gave some helpful hints on nutrition, and the importance of keeping healthy. 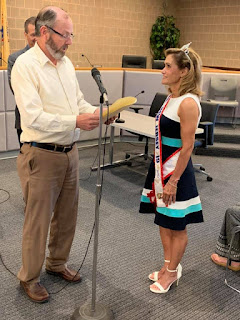 all photos, courtesy Terry Meade
QUEEN Debra was  honored with a Proclamation of Achievement, which was presented to her by Mayor Charles Watson. 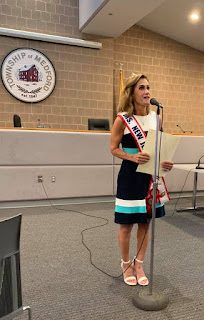 QUEEN Debra gave a short but eloquent speech, thanking everyone who made this honor possible, explained what holding the title of MS NEW JERSEY SENIOR AMERICA meant to her, and about the value of all Senior Americans to our society. 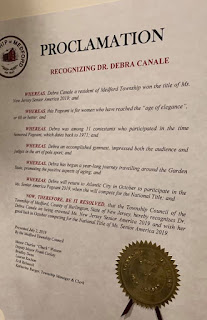 For those who are curious, did you ever wonder what was written in these "proclamations?" Don't know if you can read it exactly, but each line begins with a "Whereas", written in red, on parchment paper, stamped with a gold seal with the town's emblem, and mounted in a folder. 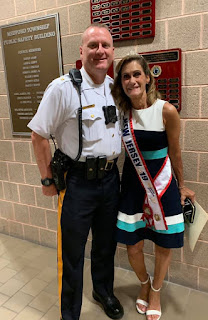 After the meeting, there were opportunities for a photo op with those in attendance.  Medford Township Chief of Police, Richard Meder wished Dr. Debra well and was happy to pose for the paparazzi. 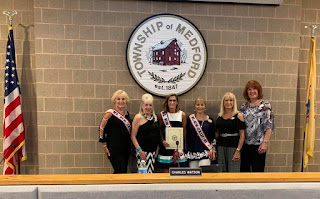 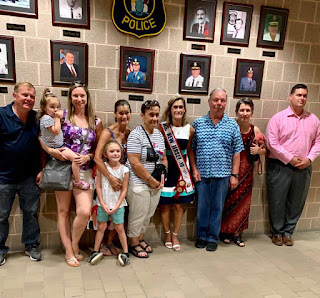 Family and friends were also in attendance to celebrate Dr. Debra's recognition.  This group included: her children, grandchildren, siblings, a mother-in-law and friends.

In the meantime, QUEEN Debra also received letters of recognition and congratulations from Governor Phil Murphy and Cory Booker, US Senator from New Jersey.

QUEEN Debra participated in the Smithville 4th of July Parade yesterday.  Although it was hot, "mother nature" provided a picture perfect day for the annual event in Galloway Township. 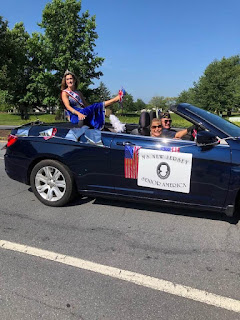 all photos courtesy family of QUEEN Debra
The QUEEN on the parade route and in action as she shows her sparkling shoe!  She is chaperoned by Becky Orsatti/MSNJSA'10. 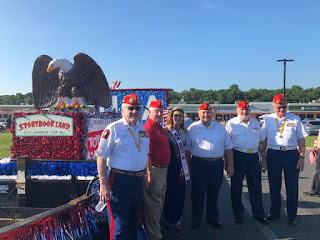 Many Veteran groups marched and Debra posed in several pictures.  This one was with the Marine Corps Veterans. 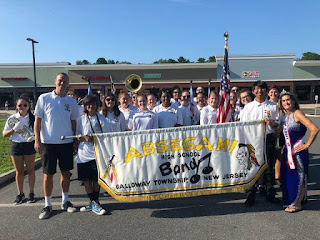 Many high school bands were on hand also, who provided lively tunes as they marched.  Dr. Debra found one such group warming up in the parking lot, the Absecam High School Band, from Galloway Township. 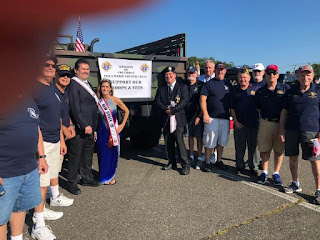 The Knights of Columbus were happy to oblige QUEEN Debra as they awaited their turn to enter the parade route. 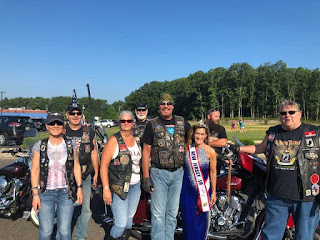 All sorts of groups were there, including these bikers. 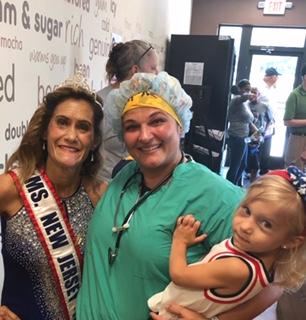 QUEEN Debra literally left no one out.  While waiting for the parade to start, she went into the building where the temporary medical emergency facility was set up, and said hello to the staff.  She found a nurse colleague, who was more than happy to smile for the camera.  The little girl forgot her troubles for a second and did the same.

QUEEN Debra has just begun her reign, and from the looks of things, she seems to be enjoying every moment of it.  Kudos to a job well done so far!
Posted by Ms New Jersey Senior America at 10:25 AM No comments: