Here are some photos taken by Debby Berger, which were in the PHOTO GALLERY, an online news publication, by THE TIMES, OF TRENTON, on Friday, June 5th. Many thanks to Debby for her coverage.

Pianist Elva Lawrence, MSNJSA 1987, played a medley of popular songs that had the audience singing along.

The following are the Talent Presentations from the Class of 2009, (not necessarily in this order):

Barby Jo Crema, singer, Oceanville. "The Best From This Moment On". 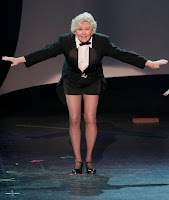 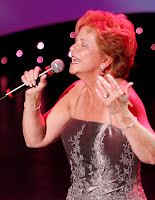 Bernadette Dudek, singer, Manchester. "I Could Have Danced All Night".

MS NEW JERSEY SENIOR AMERICA PAGEANT STATE DIRECTOR, Johanne Santori, provided a break in the talent portion of the the program. She sang the French song, "Hymn a l' amour", and dedicated it to her husband, Adeo. 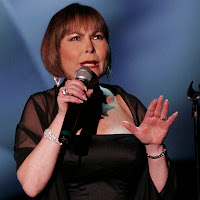 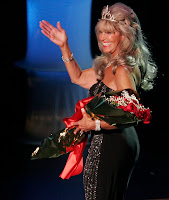 Outgoing Queen Jo Ann Gordon, MS NEW JERSEY SENIOR AMERICA 2008, smiled broadly, as she crossed the stage, for her farewell walk. She presented a video montage, which was a nostalgic look back at her reign. After her farewell speech, she sang the song, "Home", from the Broadway show, WICKED.

The CLASS OF 2009, awaiting the judges decision of the top 5 finalists.

Last year, Harrah's Resort and Casino became the new home of the MS NEW JERSEY SENIOR AMERICA PAGEANT. This year, the 2009 pageant was held on Thursday, June 4th. Elegant ladies 60 years old and over, came from different parts of the Garden State, and graced the stage of the Concert Venue Theater.

The pageant began with a patriotic salute led by the Atlantic City High School Junior ROTC, and a stirring rendition of "God Bless America", was sung by New Jersey State Pageant Director, Johanne Santori. Helen Halpin McCarney served as Mistress of Ceremonies, and was assisted by Johanne Santori. A comedienne and fabulous entertainer, Helen's comedy routines, songs and impersonations brought the house down with laughter. At 93 years young, pianist Elva Lawrence, MS NEW JERSEY SENIOR AMERICA 1987, delighted the audience with a surprise medley of songs, and had everyone clapping and singing along. Choreographer Melanie Brough staged a clever number for the contestants to the song "LADY IN RED", in which she also danced. Operatic soprano, Josephine Araniti, MS NEW JERSEY SENIOR AMERICA 2007, sang the aria, "Signore Ascolta", from Puccini's opera, TURANDOT. As her final high Bb rang through the theater, people stood up and shouted "bravo"!

Outgoing queen, Jo Ann Gordon presented a video montage of her year's reign. Her farewell speech was touching and eloquent. She concluded with a poignant rendition of the song "Home", from the Broadway show, WICKED. The audience was moved by her performance and applauded her generously. Jo Ann Gordon, MS NEW JERSEY SENIOR AMERICA 2008, is a beautiful, intelligent, generous and gracious woman, and as Queen, she stayed true to the ideals of SENIOR AMERICA. She has the love and respect of all her NJ Cameo Club sisters.

The moment finally arrived and a hush fell over the audience, as everyone waited anxiously for the announcement of the judges results. The ladies lined up across the stage, dressed in gorgeous evening gowns, each hoping to be chosen MS NEW JERSEY SENIOR AMERICA 2009. But, alas, the enviable title could only be awarded to one woman ... and that lucky lady is: BERNADETTE DUDEK! The audience was delighted with the judges decision, as they stood up and applauded and cheered for their new Queen, Bernadette Dudek.

Bernadette comes from Manchester and lives in La Rennaisance Adult Community. A tall and statuesque woman, Bernadette looked stunning, wearing a light blue, A-shaped strapeless gown, with a demure front slit. For her Talent Presentation, she sang a lively rendition of "I Could Have Danced All Night". When her name was called, Bernadette broke down, shedding tears of happiness. Outgoing Queen Jo Ann Gordon, did the honors of crowning Bernadette, pinned on the banner, and presented her with a trophy and a bouquet of red roses. As she took the traditional Queen's walk downstage, Bernadette looked simply radiant, smiling and throwing kisses to all her subjects. Jim Craine, popular Atlantic City entertainer affectionately known as the "singing lifeguard", sang the "Ms New Jersey Senior America" theme song. At that point, all pandemonium broke loose when photographers, family and friends, and well-wishers emerged onto the stage to congratulate their new Queen.

REFLECTIONS FROM THE CLASS OF 2009

Thirteen elegant ladies from the Class of 2009 had the opportunity to meet each at a luncheon that was sponsored by the New Jersey Senior America Cameo Club. The event was held at The Regency at Dover in Toms River, on Monday, May 18th. The luncheon was organized by President Delores Puzio, and committee, which included Lyn Gibson, vice-president, Cathy Clark, secretary, and Doris Criscione, treasurer. Also in attendance, was New Jersey State Pageant Director, Johanne Santori.

This reporter spoke to several ladies afterward, by phone and asked them to comment on the luncheon and the upcoming pageant.

Johanne Santori: All the ladies this year possess brains, poise, talent and beauty. Their preliminary interviews were so impressive ... each lady has a different, yet impressive resume. I expect great things from them all!

Delores Puzio: I was very impressed at the friendliness of all the ladies at the luncheon. They talked to each other very easily, and were supportive of one another. There was much bonding in the room. I welcome them all into our "sisterhood".

Lyn Gibson: Can't wait to see these ladies onstage. They all look so beautiful. I know that they will wow the judges!

Doris Criscione: This class has sold a record amount of tickets. It seems each lady has brought her own fans to cheer her on.

Cathy Clark: Ladies seem quite wired up and eager to go. They look great and come in all shapes and sizes, and each seems to possess a high level of intelligence and sophistication .... something the judges look for.

Jo Ann Gordon: It has been an honor and a pleasure to meet the Class of 2009. I shared some of my experiences as this year's queen, and I hope that I was helpful in giving them a glimpse of all the wonderful things that are in store for them. I wish them well on June 4th, and I look forward to crowning the new queen who will best exemplify the "dignity and maturity of all Senior Americans".

Barby Jo Crema: I think the contestants are all lovely women. We are so lucky to have a beautiful theater like Harrah's. It makes for a more glamorous pageant.

Bernadette Dudek: Every lady is very special, and I am glad I had the opportunity to meet them.

Barbara Ross: The ladies are great. Whatever happens, we are all winners.

Gloria Segal: I was impressed with all the lovely women in this year's class. Last year, I had to drop out of the pageant at the last minute due to illness. I am so happy that this year I was accepted again. I am feeling great and will do my best.

These are just a few comments from our fabulous ladies. The stage at Harrah's is ready. The MS NEW JERSEY SENIOR AMERICA PAGEANT 2009 is just days away. Who will be crowned the new queen, who will then go on to represent the Garden State in the national pageant in October?

Come on down to witness all the glitter and glamour for yourself at Harrah's Resort and Casino on Thursday, June 4th, Concert Venue Theater, at 1:00 pm sharp. Tickets are $10.00 and are still available at the door.
Posted by Ms New Jersey Senior America at 7:47 PM No comments: