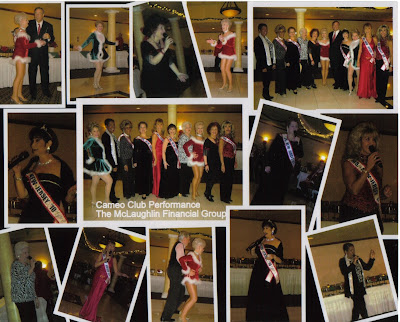 The collage and photos below were prepared by our newest NEW JERSEY CAMEO CLUB sister, Patricia Genovese. In the photo starting at the top row on the left: Delores dances with John McLaughlin; lovely Patricia does a stylish tap routine; Dale captures the crowd with a great country tune; Delores does a lively tap dance; the group poses with John. In the second row: Queen Rebecca dazzles the crowd with a selection from her current CD, "Starting Here, Starting Now"; another group shot of these fabulous ladies; Josephine sings "O Holy Night"; JoAnn invites the crowd to sing along with her. Bottom row: Agnes sings a country song; Johanne sings "The Most Wonderful Time of the Year"; Delores found a willing volunteer to dance the jitterbug; Rebecca in an encore performance; and Sherri, singing the popular song, "New York, New York". Norma did the "old lady" comedy routine, but is not in the collage. 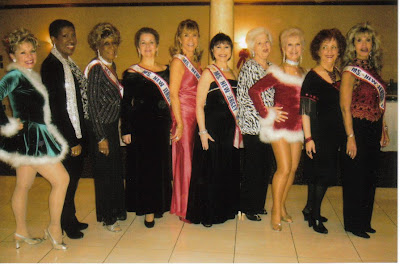 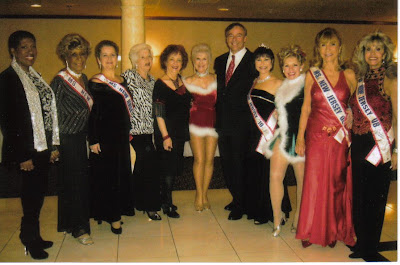 Here, the ladies of the NEW JERSEY CAMEO CLUB are joined by John McLaughlin, president of the McLaughlin Financial Group.

Since winning the title of MS NEW JERSEY SENIOR AMERICA 2010, Rebecca Orsatti and the ladies of the 2010 Queen's Court have been quite busy. Rebecca has made many appearances statewide on TV, radio, and in newspapers and magazines, and has done a wonderful job to promote the positive aspects of aging.

She and the 2010 Queen's Court are the first choice as performers in the New Jersey Cameo Club Showcases. They, along with the other ladies of the "sisterhood" spread joy and happiness wherever they perform.

John McLaughlin, president of the firm, The McLaughlin Financial Group, gives an annual Christmas party for his clients, as a token of gratitude for their business. The event was held at LA BOVE GRANDE RESTAURANT in Lakehurst on Thursday, December 16th. The ladies of the NEW JERSEY CAMEO CLUB provided the entertainment for the affair. Afterwards, they sat down to partake in the sumptuous dinner that followed.

Rebecca will have more to do in the year ahead as the official ambassador for the MS NEW JERSEY SENIOR AMERICA PAGEANT. As 2010 comes to a close, she gets many cudos from her sisters, the "elegant ladies" of the NEW JERSEY CAMEO CLUB, and the gratitude from the many people whose lives she has touched thus far.
Posted by Ms New Jersey Senior America at 5:40 PM No comments: