The past week was very busy for the fabulous ladies of the NEW JERSEY CAMEO CLUB, and Carolyn Slade Harden, MS SENIOR AMERICA 2017.  The Club is in high demand by organizations around the State, this year, because of the opportunity to meet the National QUEEN.  Showcase Director Renee Tompkins, has done a great job in scheduling Carolyn to appear before groups that extend well into the year 2018. 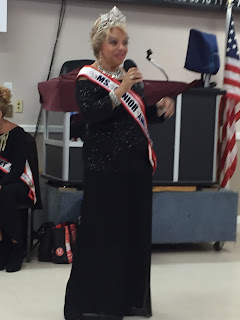 photo, compliments Denise Mechan
On Tuesday, November 14, the Club entertained the Veterans at the Elks Lodge in Manahawkin.  Before she sang, QUEEN Carolyn shared memories of family members who served in the military, and thanked the veterans for their unselfish service in keeping America safe. 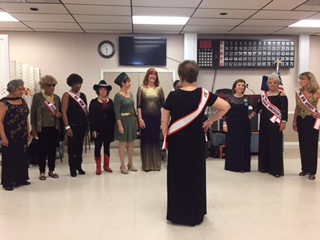 photo, compliments Denise Mechan
Veterans were delighted by the sensous performance by the GRANDE DAMES CHORUS' rendition of the Salute to Diana Ross. 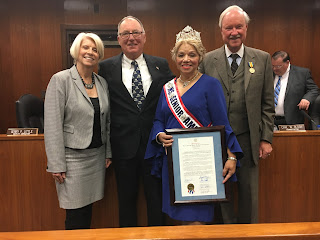 photo, compliments Mark Meade
The next day, QUEEN Carolyn was honored once again by the Ocean County Board of Chosen Freeholders in Toms River, this time, for her National Title.   Freeholder Little made the presentation, and wished her well as she begins this year of her reign. 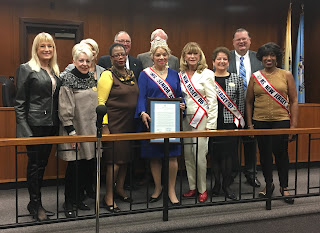 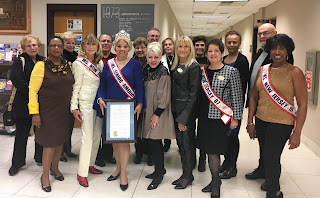 After the meeting, QUEEN Carolyn and the Club took more photos in the lobby, joined this time, by an entourage of friends from La Rennaisance. 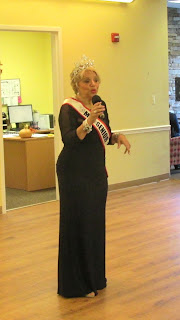 photo, compliments Mark Meade
The holiday season officially started on Thursday, and the residents of The Regency in Toms River were treated to the Club's first Holiday Showcase. 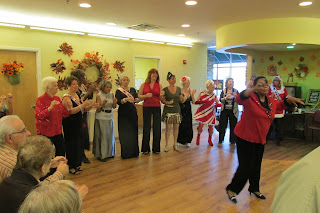 photo, compliments Mark Meade
Nancy Bassett, got everyone clapping and moving, with her roudy performance of the rock song classic, "We Are Family".  Terry Meade, MSNJSA State Pageant Director, and Diane Beebe/MSNJSA2014, were donned in festive holiday costumes, and had their own special moves to enliven the room.

As the familiar carol says, "Tis the Season to be Jolly!"  Well, the ladies of the NEW JERSEY CAMEO CLUB have only just begun making merry and spreading their special brand of Christmas cheer.  And, what's more, Renee Tompkins, Showcase Director, is feverishly working directly with Santa and his elves to make the season bright!
Posted by Ms New Jersey Senior America at 1:26 PM No comments: