THE MANY WAYS TO SAY GOOD LUCK TO QUEEN DESIREE NIGRELLI! 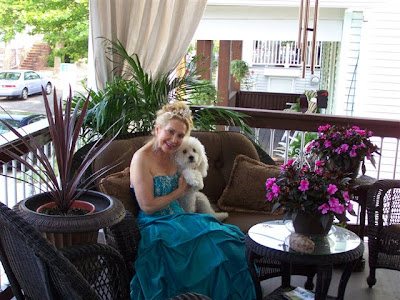 Me and my dog "Bodacious Bogart" (Bichon), on our porch, after a NEW JERSEY CAMEO CLUB show. 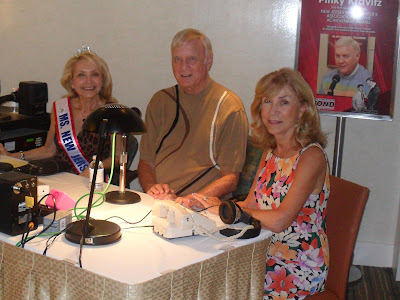 Soon after winning the title of MS NEW JERSEY SENIOR AMERICA 2011, Desiree was a guest on the Pinky Kravitz radio show. She is chaperoned by MSNJSA STATE PAGEANT DIRECTOR, Johanne Santori. 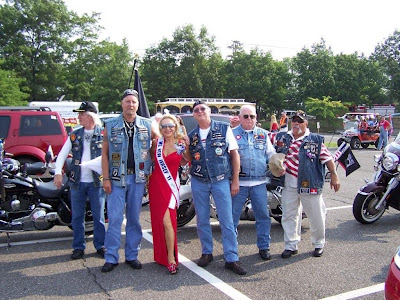 At a 4th of July parade, Desiree stands proudly with Vietnam War veterans. 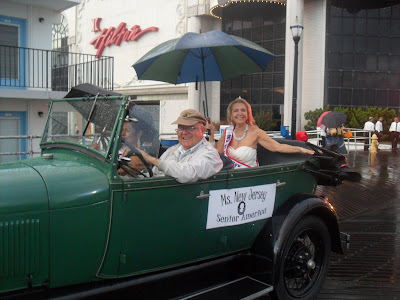 Parades are always fun. Here, Desiree and last year's Queen, Rebecca Orsatti, ride in an antique car, on the boardwalk in Atlantic City. Her winning smile wins over a crowd of approving fans. 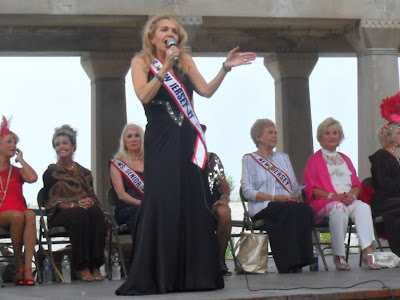 The NEW JERSEY CAMEO CLUB gave a show at Kennedy Mall on the boardwalk in Atlantic City in August. Desiree delivered a great performance that evening. 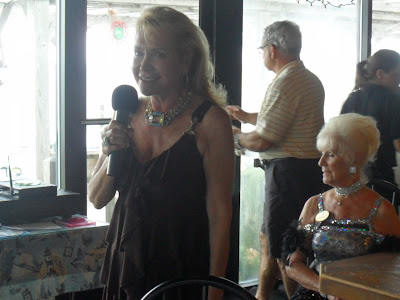 At a recent show, Desiree removed her crown and banner to honor wounded Veteran's and to observe the 10th Anniversary of the World Trade Center Bombing. She sang, "Proud To be An American".

A HEART FULL OF WISHES - POEM
I have so many wishes
That I've stored up in my heart
Today I sit here thinking
I'm not sure where to start.
I wish to send you smiles
So that all throughout your day
You'll think of only happy things
And life will go your way
Next, I wish to send you hugs
The warm and snugly kind
You'll feel them with you constantly
More sincere hugs you could not find.
Of course, I wish you lots of love
Forever and especially for you
A heart filled with love so sweet
Never-ending and Oh, so true.
Sunshine and laughter and all happy things
I wish for you today
And all God's Blessings be with you
Forever and in so many ways.
published by .... Angel Wings, 2001

GOOD LUCK WISHES
Follow your dreams for they will always lead you in the right direction. Josephine Araniti, MS NEW JERSEY SENIOR AMERICA 2007/PUBLICITY
Please visit our website http://www.njsramericacameoclub.org/, or http://www.msnewjerseysenioramerica.org/, for more information on Queen Desiree Nigrelli, and the MS SENIOR AMERICA PAGEANT 2011.To a special friend who's heart is full of love and compassion. You are the best ... I said that from the moment I met you and I truly wish for this National Pageant to be a wonderful experience for you. There is no doubt you will be the MS SENIOR AMERICA 2011 ...
Fondly, Your Friend ..... Mary Ann Andrews. All you can do is the best you can do. So sing your heart out! ... Agnes Traschetti
Buona Fortuna, in Italian means Good Luck, as do the others, Ve"els Geluk in South African, and the next two are African dialects; nkore, nkore, and siyaguhaly ... LUV, Silvia Silano
Go Girl, Make It Happen! ... Delores Puzio, MS DELAWARE SENIOR AMERICA 2008 & SHOWCASE DIRECTOR/NEW JERSEY CAMEO CLUB
Dear Queen Desiree,
When I had the pleasure to meet you last Spring, I was very impressed with not only your beautiful look, but the complete lady that you are. Your life is full of accomplishments that would make a perfect MS SENIOR AMERICA. We are very proud of you and that you will represent our State, and we know that you will shine with all your qualities. Have a wonderful time and enjoy every second. You are building a memory that your family will always cherish. You will make lots of friends all over the United States, and that is very special. Bonne Chance et Nous T'aimons. Adeo and Johanne Santori, MS NEW JERSEY SENIOR AMERICA 2006 & MS NEW JERSEY SENIOR AMERICA STATE PAGEANT DIRECTOR.

Posted by Ms New Jersey Senior America at 10:18 AM No comments:

The summer of 2011 was as hot as it was busy for the ladies of the NEW JERSEY CAMEO CLUB. To paraphrase the motto from the US Postal Service, neither the excessive heat and humidity, nor the abundance of rainfall and other natural disasters, deterred our elegant ladies from "performing their expected rounds". The following is a recap of some of their summer activities.

The ladies of the NEW JERSEY CAMEO CLUB worked together with the MS NEW JERSEY SENIOR AMERICA PAGEANT organization, and helped State Director Johanne Santori to make the 2011 pageant a success. At the July meeting, they prepared a special luncheon and bought a cake to honor the new queen, Desiree Nigrelli.

There were many NEW JERSEY CAMEO CLUB SHOWCASES during the 3 month period, and our great ladies gave dazzling performances for a variety of age-related audiences. The shows gave people the chance to meet and hear the current Queen, and to wish her well as she prepares for the National Pageant. The songs of Desiree Nigrelli, MS NEW JERSEY SENIOR AMERICA 2011, have brought much joy, and her encouraging words have given hope to our audiences.

The highlight of the summer, was the outdoor show at the Kennedy Mall on the boardwalk in Atlantic City in August. Ominous weather was in the forecast for the Sunday evening performance, but the rain held out just long enough for the show to go on. The show was in a variety format, and included songs, dances and humor that was enjoyed by a family oriented audience. Kudos go to Delores Puzio, NEW JERSEY CAMEO CLUB SHOWCASE DIRECTOR, for arranging such an ambitious summer schedule.

The long awaited website was finally launched, www.msnewjerseysenioramerica.org, thanks to Dale Maglia, president of the NEW JERSEY CAMEO CLUB. Although there are no photos in this article, the website includes many from the summer.

The one event that disappointed everyone and ignited a firestorm of angry opinion, was the airing of portions of the MS NEW JERSEY SENIOR AMERICA PAGEANT 2011, as seen through the eyes of the writers of the show, JERSEYLICIOUS, on the Style Network. Although the show reached a national viewing audience, it did nothing to capture the essence of the pageant, since its writers portrayed women in the "age of elegance" in an unfavorable and untrue fashion.

For the most part, last summer was a good time for the ladies of the NEW JERSEY CAMEO CLUB. They have done their best to make a difference, in the lives of the people they touched. Their record of achievements far outweigh any occasional disappointment, and only makes them work harder to dispel injustices that have befallen them and to people in their age group. They look forward with enthusiasm to the coming year, and welcome whatever challenges that might lay ahead.
Posted by Ms New Jersey Senior America at 3:07 PM No comments: