July was a month in which the ladies of the MS NEW JERSEY AMERICA PAGEANT Organization and its service wing, the NEW JERSEY CAMEO CLUB, went on an emotional "roller coaster ride", as both good and bad news reached the "Sisterhood".

The NEW JERSEY CAMEO CLUB Showcases continued to bring joy and entertainment to their elderly constituents who are living in nursing homes.  The residents received the "ambassadors of love", with enthusiastic applause, and grateful conversation following the performances.

The 3rd quarterly meeting of the NEW JERSEY CAMEO CLUB was held Wednesday, July 17th at the American Legion Post in Lakewood.  A delicious luncheon of assorted deli sandwiches and salads was served, followed by a special cake for dessert, to honor the new Queen, Vanessa Shaw, MS NEW JERSEY SENIOR AMERICA 2013.  There were many items discussed at the meeting, however, the health issues and progress of certain "sisters" were of particular importance.  Members who are facing uphill battles on the journey to recovery are: Agnes Raimondi, Beverly Pierce and Sandra Greco/MSNJSA 2003 & MSSA2003.  Queen Vanessa spoke briefly to outline her busy schedule, and reported on the Proclamations and congratulatory letters she has received from local and State legislators thus far.  She expressed her feelings of love and gratitude towards her "sisters", who have welcomed her into the organization. 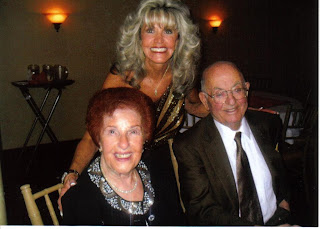 ﻿Josephine and Joseph C. Mazzarella and Jo Ann Gordon/MSNJSA2008 and Vice President, NEW JERSEY CAMEO CLUB
﻿
The MS NEW JERSEY SENIOR AMERICA PAGEANT Organization and the NEW JERSEY CAMEO CLUB mourn loss of Joseph C. Mazzarella of Lavallette, who passed away earlier this month at age 89.  He is survived by his wife Josephine, stepdaughter Jo Ann Gordon, and nieces and nephews.  Joseph and Josephine are sponsors of the Pageant.

SENIORS GOT TALENT Contest was Sunday, July 28th.  Patterned after the nationally televised NBC TV show AMERICA'S GOT TALENT, the event was held at the beautiful and historic Strand Theater in Lakewood.  Among the 23 contestants, there were 10 ladies from the NEW JERSEY CAMEO CLUB, who were the following:  Carol Rosario, singer/Volare; Brenda Christian, dancer/Singing In The Rain; Josephine Araniti/MSNJSA'07, singer/Un Bel Di; Lyn Gibson/MSNJSA'00, singer/Come In From The Rain & Stormy Weather; Rebecca Orsatti/MSNJSA'10, singer/Don't Rain On My Parade; Renee Tompkins, singer/What I Did For Love; Jo Ann Gordon/MSNJSA'08, singer/Come Back To Me; Leah Whelan, singer/I Dreamed A Dream; Carol Dugan/MSNJSA'13, singer/America the Beautiful & Living In The USA; and Diane Beebe, singer/Bring Him Home.  The ladies were wonderful, and their performances raised the bar for the rest of the contestants.  Two NEW JERSEY CAMEO CLUB ladies won purses: Josephine Araniti won the 1st Place Prize of $750.00, and Rebecca Orsatti won 3rd Place Prize of $350.00.  The 2nd Place Prize of $500.00 went to Sal Benigno of Manchester.

As the month comes to an end, a familiar biblical quote comes to mind, "to everything there is a season".  The members of the pageant organization have witnessed the "circle of life", and have endured its highs and lows.  May the members who are ill, be restored to good health, and those who are healthy, continue to use their God given talents.

FYI: In order to respect the memory of Joseph C. Mazzarella, this author decided to publish the above article without fanfare or flourish, and only used one photo.
Posted by Ms New Jersey Senior America at 11:47 AM No comments:

WE HAVE A WINNER!

﻿
﻿﻿﻿﻿
﻿﻿﻿
﻿﻿﻿﻿﻿Tensions were high yesterday inside the Algonquin Theater in Manasquan, as audience and contestants awaited the judges' results of this year's Shore Senior Idol contest.  Now in its 5th season, the local contest patterns itself after its national counterpart, American Idol, the obvious difference being the age level of 55 and over, as the main requirement.  There were 18 very talented contestants, the same number of men as there were women, and musical styles ranging from country, jazz, Frank Sinatra wannabees, broadway, popular, rock and opera.

Four NEW JERSEY CAMEO CLUB ladies made the finals:  The elegant ladies who graced yet another runway were:  Jo Ann Gordon/MSNJSA2008/VP, Renee Tompkins, Diane Beebe, and Carol Dugan/MSNJSA2012.   Bernadette Dudek/MSNJSA2009, was the Mistress of Ceremony, and led the contestants in the opening number, "Another Op'ning, Another Show".  After the intermission, there was a special performance by Josephine Araniti/MSNJSA2007, and 2012, Shore Senior Idol Winner, who sang "Un Bel Di", from Puccini's opera, MADAME BUTTERFLY.

The performances of the NEW JERSEY CAMEO CLUB ladies were professional and outstanding in every way, and raised the bar for the other contestants.  In the end, one emerged as a winner, with Diane Beebe in 2nd Place, who took home a prize of $350.00.  She sang "O Mio Babbino Caro", from Puccini's comic opera, GIANNI SCHICCI.  The other winners were:  Sal Benigno/1st Place, and Marvin Schuman/3rd.

Once again, the fabulous ladies of the NEW JERSEY CAMEO CLUB shined, gave their best, and were a credit to the CLUB and the MS NEW JERSEY SENIOR AMERICA PAGEANT organization.  Sunday was their "finest hour", and congratulations on a job well done!

Posted by Ms New Jersey Senior America at 7:17 AM No comments: