The July 13th meeting of the fabulous ladies of the NEW JERSEY CAMEO CLUB was lively, energetic and filled with ideas for the club's future growth.  It was a time to strengthen the bond with members who came from different parts of the Garden State, and to welcome the new QUEEN and the Class of 2016 into the "Sisterhood".  The attendance was very good, despite the extremely hot and and humid weather.  Many ladies donated to the "food/goodies drive for our veterans", held by Diane De Salvo-Beebe/MSNJSA2014. The gown/shoe swap was also a success.  Diane Beebe, modeled a stylish shrug that she designed to wear with a gown.  It comes in white only, and is just enough coverage to keep the shoulders warm in air conditioned theaters and ballrooms.  She is willing to make them for a cost of $15.00 to $20.00.  The usual committee reports were given, with all indications point to the membership is cooperating with Director Santori to maintain the vitality and continuance of the CLUB and Pageant Organization. 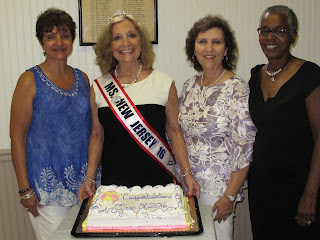 Before the meeting, there was a delicious luncheon, consisting of sandwiches, salads, fresh seasonal fruits and Jo Ann Gordon's delicious blonde brownies.  To top that off, cake and coffee was served.  QUEEN Diane smiled brightly, as she displayed the special cake, with the words, "Congratulations to the Class of 2016".  Diane De Luca, MS NEW JERSEY SENIOR AMERICA 2016 posed with 3 ladies in the QUEENS COURT.  To her left is: Geri Georger/Toms River, 2nd runner up, and to her right are: Renee Tompkins/Wall, 1st runner up, and Wenonah Brooks/Hopewell, 4th runner up. 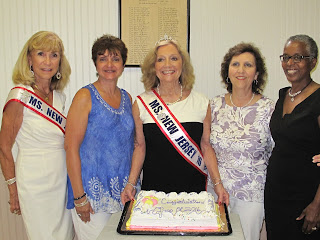 During the meeting, State Pageant Administrator/Director, Johanne Santori, MSNJSA2006, on the far left, introduced QUEEN Diane to the membership, and presented her with her first pin, which is the traditional crown, and a stylish bag.  Johanne encouraged her to carry on the custom of adding pins to her banner.  QUEEN Diane also received a financial gift award, which was given to her by Carole Lelli, President, on behalf of the NEW JERSEY CAMEO CLUB. 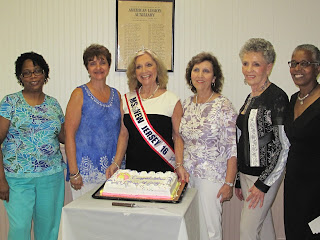 Diane also spoke about her schedule since becoming QUEEN.  Director Santori keeps her busy with parades, and NEW JERSEY CAMEO CLUB SHOWCASES.  She has received numerous plaques and letters of acknowledgement from New Jersey  and US Legislators.  Later this month, she will meet personally with the Atlantic County Board of Chosen Freeholders, and in August, she will be honored by the Mayor and Town Council at Linwood Townhall.  In the above photo, 2 more ladies from the Class of 2016 posed with the QUEEN AND COURT, who are: Nancy Bassett/Lakewood, on the far left, and Judith Panos/Lebanon, second on the right.
Posted by Ms New Jersey Senior America at 9:53 AM No comments: