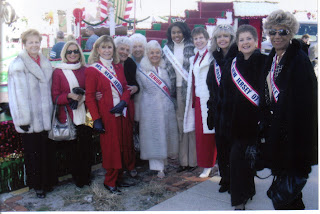 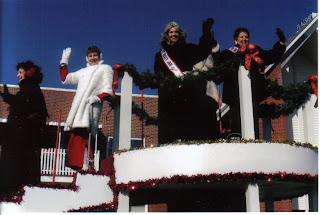 It's that time again, when people say goodbye to the old year and ring in the new. For the members of New Jersey Senior America, it was no different. The year 2008 was marked by growth transition and change. It was a time to say goodbye and thank you to outgoing State Director Louise Ferla, and to welcome Johanne Santori to the position. Together with the help of Pinky Kravitz, affectionately known as "Mr. Atlantic City", they found a new home for the 2008 State Pageant at Harrah's Hotel and Casino.
The national pageant also needed to relocate from Las Vegas, so Johanne and Pinky persuaded the management of Harrah's to hold it there as well.
Johanne enlisted a force of devoted volunteers, and together, they worked tirelessly to produce a magnificent 2008 New Jersey Senior America Pageant.
The New Jersey Cameo Club, which is the service wing of New Jersey Senior America, also had a record year of performance showcases around the the Garden State. The Class of 2008 produced more ladies than ever who gave so unselfishly of their time and talents. Much of the credit is due to Marge Wanamaker, Showcase Director. She too, has decided to retire, not from performing, but from the position. Thank you, Marge, for a job well done! Doris Criscione and Cathy Clark, will co-chair the position, and are currently busy setting up the 2009 schedule.
Several people received proclamations from City and State this year. In September, Jo Ann Gordon, NJSA 2008, was honored by Mayor Stephen C. Acropolis and the Brick Town Council. In October, the New Jersey State Legislature sent written proclamations to Jo Ann Gordon, NJSA 2008, Josephine Araniti, NJSA 2007, Johanne Santori, NJ State Pageant Director, and Dr. Al Mott, founder New Jersey Senior America, and Senior America, Inc.
The last event of the year was the Christmas Parade in Atlantic City. The Saturday following Thanksgiving was a crystal clear and sunny day, with temperatures around 50 degrees. Atlantic Avenue was lined up with people of all ages and as the parade turned into the shopping outlets the crowd of shoppers cheered us to the end. Our float was headed by 2008 Queen Jo Ann Gordon and her court.

THE SPOTLIGHT IS ON: DR. SANDRA GRECO, M.D. 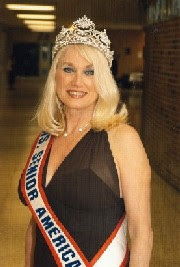 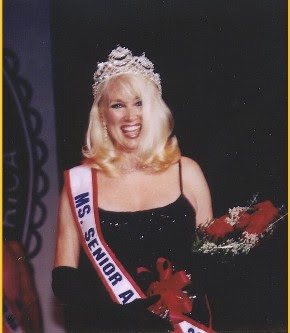 In the years that followed, many elegant and talented New Jersey Senior America Queens competed for the coveted national title, but no one won. Our founder, Dr. Al Mott explained that during those years, the growth and popularity of the Senior America Pageant was tremendous throughout the country and US territories. Each year, hundreds of beautiful and talented women aged 60 and over came out to compete, and the coveted title went to many other States.

Then, in 2003 the tide changed. When beautiful and talented Dr. Sandra Greco, M.D won the State Pageant, everyone connected with New Jersey Senior America hoped and that she would be the one to bring the title back to the Garden State. And she did!

Sandra was crowned the 23rd Ms Senior America at the Golden Phoenix Hotel Casino in Reno, Nevada on November 8, 2003. Dr. Greco sang "Misty" during the talent portion of the show.

In 1976, Sandra decided to attend medical school, and completed an accelerated course, receiving her M.D. in 1979, where she earned honors in surgery, medicine, obstetrics-gynecology, and radiology. She completed a residency in emergency medicine at the University of Chicago, and worked in the emergency department of an Evanston Illinois hospital. In 1984, she moved to New Jersey, and took a position as director of emergency department at a Newark New Jersey hospital where she worked for 16 years. After her retirement, Dr. Greco continued to work part-time at an emergency department in Red Bank, NJ.

Sandra has two married children, and two grandchildren, and is remarried to Danny Drucker. She has been spokesperson for Holiday Retirement Company, and continues to perform and travel with the Cameo Club of New Jersey. Sandra enjoys travel, biking, physical fitness, as well as the theater and the opera. She and Danny have a secondary home in Florida, where they live several months of the year there. She serves currently as the vice-president of the National Cameo Club.
Posted by Ms New Jersey Senior America at 1:38 PM No comments:

THE SPOTLIGHT IS ON: JAN DICKSENSON 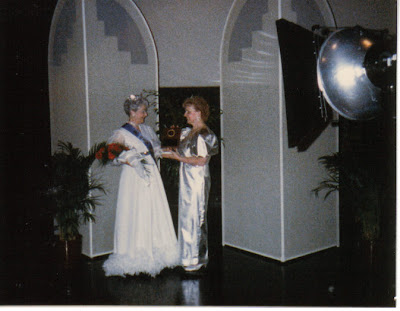 In the photo above, Jan Dickenson on the left, has just been crowned Ms New Jersey Senior America 1986, by former State and National Queen, Laverne Stokes. No photo of her as Ms Senior America 1987 is available.

In the following year, the national crown and title went to yet another "lady of elegance" who hailed from the Garden State. Lovely Jan Dickenson, lived in Leisuretown, an adult community located in Southampton. A talented vocalist, she sang the popular song, "Young at Heart". The event was again held in Atlantic City at Resorts.

Many years have passed at this writing, and not much is known is known about Jan through this reporter. Laverne Stokes however, remembered Jan as a sweet and humble lady, who gave a strong vocal performance at the 1986 State Pageant. She recalled that Jan served as Ms New Jersey Senior America 1986, and then, as Ms. Senior America 1987 with grace and charm. She remained an active performer with the New Jersey Cameo Club for many years.

After the death of her husband, Jan suffered a stroke, and had to move to Florida where she lived with her daughter.
Posted by Ms New Jersey Senior America at 2:21 PM No comments: