Last Saturday evening,  friends, family and "sisters" came together to honor Carolyn Slade Harden, MS SENIOR AMERICA 2017.  More than 200 people attended the lavish party which was held in the ballroom at La Renaissance in Manchester.  Christmas was the theme, and the ballroom was decorated with red and white pointsettas, adorning the stage and tables, and fresh white tablecloths, with gold ribbons on the back of each chair, added a touch of elegance.

All photos, compliments, Mark & Terry Meade
Soon after Carolyn won the National Title last October, plans for a party began to take shape.  A "Celebration Committee" was formed, which consisted of friends from La Renaissance and the New Jersey Cameo Club, and they are: from La Renaissance/Linda Celiano, Diane Harkavy, Arlene Kearney, Beverly Terranova, Paula Williams, Phyllis Zauberman, and Sherri McGhie, from the New Jersey Cameo Club.  Pictured above were the complimentary pamphlets for each guest to take home as a memento of the occasion. 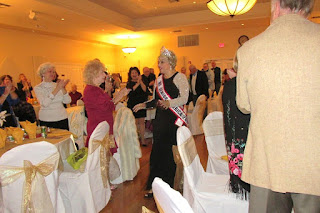 Dick Guariglia, also part of the Committee served as emcee, and kept the evening flowing smoothly and pleasantly.  First on the agenda, was the announcement and procession of QUEEN Carolyn.  Everyone stood and welcomed her with warm and generous applause as she walked down the center aisle. 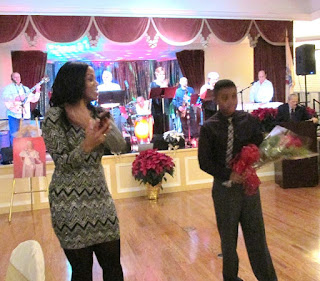 When she arrived at the front of the room, she was greeted by her daughter and grandson, who handed her a lovely bouquet of roses, and lots of kisses! 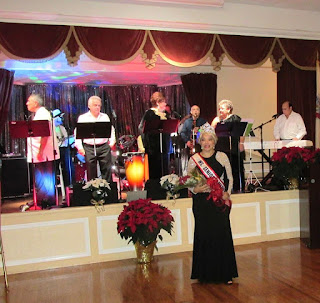 There she is, posing for the many guests with cameras, hoping to take as many photos of Carolyn as they could.  While in the background, the "Continental Entertainers", along with songstresess Linda Celiano and Phyllis Zauberman, provided music throughout the evening for everyone's dancing pleasure.  Carolyn's sister, Beverly who is a professional singer, gave a tribute to her sibling, with a poignant rendition of the popular song, "The Wind Beneath My Wings".  Of course, the evening wouldn't have been complete without a song from QUEEN Carolyn herself. 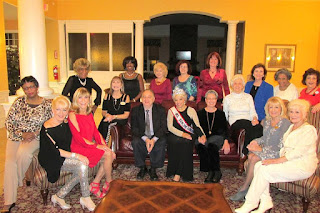 During the evening, the "sisters" gathered together in the lobby for a special photo to commemorate the occasion.  Other guests of honor who attended were:  Dr. Al Mott, his wife Betsy and their assistant Robin Milne (standing in the back behind QUEEN Carolyn wearing a sparkling blue blouse).  Dr. Mott's brief speech was uplifting and eloquent.

It was a grand event for a grand QUEEN, and hopefully, one that Carolyn will remember and cherish for years to come.
Posted by Ms New Jersey Senior America at 11:03 AM No comments: