MEET THE CONTESTANTS LUNCHEON HELD FOR THE CLASS OF 2016 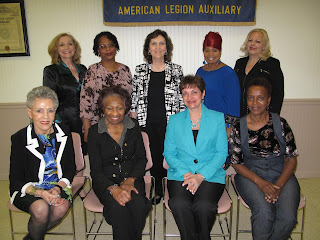 The MS NEW JERSEY SENIOR AMERICA PAGEANT 2016, is only weeks away, the exact day of which is: Wednseday, June 1st, Harrahs Resort Hotel & Casino, in the Concert Venue Theater at 1:00 PM. A "Meet The Contestants Luncheon" was held on Wednesday, April 27th, at the American Legion Post #166 in Lakewood, for 10 lovely women, aged 60 and over.  The event was co-sponsored by the NEW JERSEY CAMEO CLUB and Johanne Santori, Administrator and State Pageant Director. 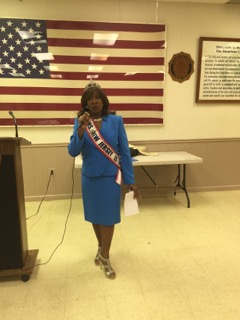 Director Santori conducted the meeting, and introduced Sherri McGhie, MSNJSA 2015.  QUEEN Sherri shared some of her experiences during the year, and gave helpful hints to the eager contestants.

Each Committee member talked about the different aspects of the Pageant, followed by Carole Lelli, President of the NEW JERSEY CAMEO CLUB, who gave an overview of the Club's purpose, background and activites, and encouraged the contestans to join.

The meeting was suspended temporarily, and everyone was invited to enjoy a tasty buffet luncheon.  The contestants were encouraged to continue to get to know each other.  Each round table had a blue tablecloth, a basket of spring flowers, and gift bags for the contestants.  Kudos to the Committee for a job well done!

After lunch, the meeting continued, with Melanie Brough, Pageant Choreographer, who held a short rehearsal of the opening number.  Director Santori continued to give more information and instructions to the contestants.  A question and answer period followed, and the meeting concluded with a photo op.

The ladies went home filled with enthusiasm, great expectations, and sufficient knowledge, as they prepare themselves for the upcoming MS NEW JERSEY SENIOR AMERICA PAGEANT 2016.  Everyone in the Pageant organization, wishes them good luck, in this most eventful time of their lives.  May their experience in the Pageant be a happy one, filled with memories that will last for many years to come.

Posted by Ms New Jersey Senior America at 9:37 AM No comments: