NJCC MEMBERS OBSERVED SEVERAL "R's" DURING THE MONTH OF JANUARY


January meant the beginning of the 2020 school year, when students returned to the traditional "three R's".  At the same time, the ladies of the NEW JERSEY CAMEO CLUB, observed several "R's" of their own.

"Relaxation and Reconnecting" was the theme for the 1st quarterly meeting on January 7th, and the perfect weather allowed the members to gather together at the Manahawkin Elks Lodge.  Each lady brought her favorite covered dish to the annual pot luck luncheon which followed the meeting

The afternoon's agenda was full of items of interest to all.  Although not in any particular order, some of the highlights included: Terry Meade, MS NEW JERSEY SENIOR AMERICA EXECUTIVE STATE PAGEANT DIRECTOR, announced the date of the 2020 PAGEANT as Wednesday, June 3rd at Harrah's, and the theme is "That's Entertainment".   Denise Mechan, COORDINATOR, NEW JERSEY CAMEO CLUB SHOWCASES, reported that 2019 was a very successful season, with a record number Showcases throughout the State, and thanked all the ladies for their fantastic talents and efforts.  She also announced an hiatus during the month of January, which would allow the ladies to "Recharge", and return "Rejuvinated" for the 2020 season.  Johanne Santori/MSNJSA 2006, and ADMINISTRATOR, MS NEW JERSEY SENIOR AMERICA PAGEANT", thanked everyone for their prayers and words of encouragement, as she fought a life threatening illness in 2019.  As she looks forward to further "Recovery",  she wished everyone good health in the year ahead. 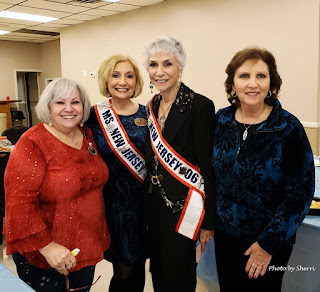 photos, courtesy Sherri McGhie
After the meeting, the fun and camaraderie began: the ladies enjoyed each others' company, and were treated to a delicious variety of covered dishes.  Millie Tate, REFRESHMENT COMMITTEE CHAIRMAN, standing on the left, did an outstanding job of coordinating the pot luck event.   She and her 3 sisters who will be celebrating their birthdays during the next 3 month were honored, and they are: Diane Deluca/MSNJSA'16; Johanne Santori/MSNJSA'06, & ADMINISTRATOR, MSNJSA PAGEANT; Renee Tompkins, member NJCC. 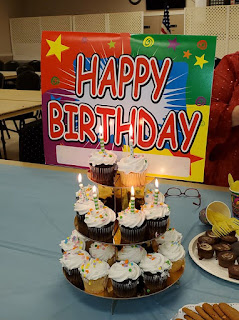 Besides the large assortment of sweets, Millie brought in a 3 tiered arrangement of cupcakes, and topped each  one with a candle.  YUM! 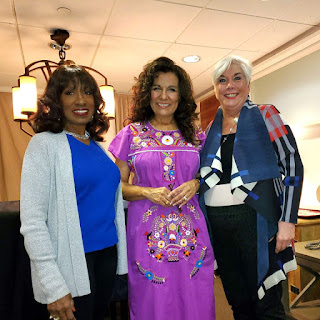 The pretaped interview showed the ladies at their homes as they prepared themselves for the day.  Each lady gave her beauty tip secrets on makeup and wardrobe.  Then Rachel Ray introduced each QUEEN to the live studio audience, and included film clips and photos from past PAGEANTS.  Sherri suggested that older women wear stylish shoes with a lower heel, and when wearing a dress, to choose a hemline that accents the best part of the leg.  Esmeralda, had more makep hints, and Nancy demonstrated the correct way of getting up from the floor safely.  Kudos to the three QUEENS who represented the MS SENIOR AMERICA PAGEANT organization excellently. 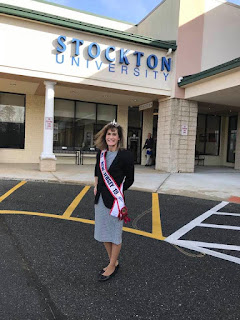 photo, courtesy  Debra Canale
New Jersey's current QUEEN was out fullfilling her schedule of speaking engagements.  Dr. Debra Canale, MS NEW JERSEY SENIOR AMERICA 2019, was the guest speaker at Stockton University, at their annual Conference on Aging.  She spoke about the positive aspects on aging, with energy, great positivity and sense of humor.

What are the rest of the NEW JERSEY CAMEO CLUB members doing during their hiatus?  Hibernating is not one of them!  The "snowbirds" are basking in sun of some southern state or carribean island, while others are staying home, nursing some "bug".  This has been a terrible season for colds and the flu.  Some members belong to drama groups or choral societies and rehearse/perform with them, while others are still working full time jobs.

Then there are the caregivers who take care of their loved one 24/7, 365 days a year.  One caregiver, in particular, Terry Meade, needs prayers as she looks after her husband Mark, who was diagnosed with pneumonia and is currently in the hospital.  May he be restored to full health very soon!
Posted by Ms New Jersey Senior America at 1:04 PM